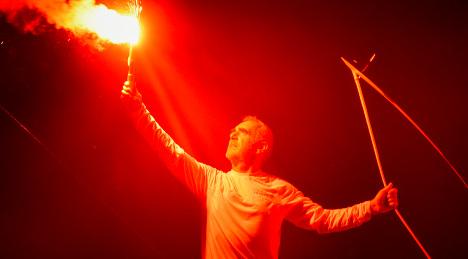 Peyron had dominated the race, aided in his quest when leading contender and fellow countryman Thomas Coville crashed his trimaran into a freighter soon after the competition began off France a week ago.

He set a new record for the journey of some 3542 miles (6560 km), clocking in at seven days, 15 hours and eight minutes, shaving more than two hours off the previous mark set by Lionel Lemonchois in 2006.

For Peyron, 54, it was seventh time lucky in the race. He took the lead just six hours out of the French port of Saint Malo on November 2, after a fierce storm took out Coville and several others.

Peyron said at the time that the seas were "Dantesque".

Former Olympic pole vault champion Jean Galfione was also among those who crashed out of the race from St Malo in western France to the French overseas department of Guadeloupe, which is held every four years.

He managed to stay ahead of the 91-strong field all the way through to the finish line.

The renowned French sailor came third in the last Route du Rhum in 2010.