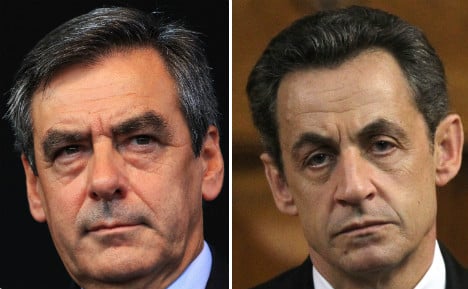 Leading daily Le Monde claimed on Sunday that Fillon had in June urged President Francois Hollande's chief of staff to push along the several legal complaints against Sarkozy.

Both Fillon and Jouyet have denied this and the former prime minister under Sarkozy's presidency, who hopes to run as the candidate of the right-wing UMP in the 2017 presidential election, hit out in the Journal de Dimanche weekly.

"I can only see in these incredible attacks an attempt at destabilisation and a plot," he complained.

He has said he will sue for defamation against two Le Monde reporters, who made the claims in a book, as well as the daily itself.

Fillon, Sarkozy and former PM Alain Juppe are the three main UMP candidates likely to run against the embattled Hollande and the high-flying far-right candidate Marine Le Pen at the next presidential election in 2017.

The three men used to work closely together. During Sarkozy's presidency, Fillon was prime minister and Juppe was foreign minister.

Sarkozy, who announced his comeback to frontline French politics amid much fanfare in September, is mired in a host of legal woes, notably over the financing of his 2012 presidential campaign.

The energetic 59-year-old has criss-crossed France in a bid to drum up support for his bid to win the UMP presidency — which he intends to use as a springboard for the 2017 election — but polls show he has failed to inspire voters.

The turmoil in the French opposition has also failed to benefit Hollande, who is the most unpopular president in French history, according to polls.

High unemployment, stagnant growth and unseemly political infighting is playing into the hands of Le Pen, who would likely win through to a second round of a presidential election if it were held now, surveys show.

And this latest "affair" may not leave Hollande unscathed, as his chief of staff is implicated in the story.