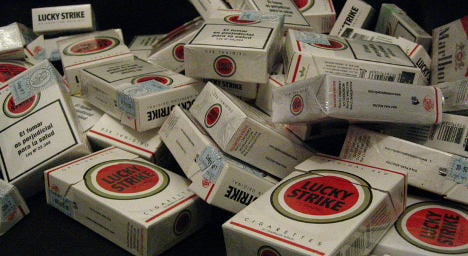 Smokers in France might have to find alternative ways to get cheap cigarettes in future or fall foul of the long arm of the law.

France's Secretary of State for the budget Christian Eckert told newspaper Le Figaro on Thursday how Paris plans to continue its crackdown on tobacco by penalising those caught buying cigarettes online.

Selling cigarettes online is already against the law in France, but currently there are no punishments in place for those who buy them, a measure cigarette companies in France and tobacconists have long been calling for.

“We will go further and ban online [cigarette] shopping in the coming weeks, matching the ban with a sanction for buyers,” Eckert said.

A survey carried out by tobacco giant Philip Morris International estimates a loss to France of about €400 million each year due to online foreign purchases.

According to BFM TV one in five cigarettes smoked in France is bought online and therefore evades the reach of the tax man.

Many of the websites that sell cheap cigarettes are based in Ireland, where taxes are lower than elsewhere in Europe.

After reviewing the Social Security budget of 2015, Eckert admitted that the high tax on tobacco in France makes people look elsewhere for their smokes.

The government is planning to work closely with online sellers, who are obliged to register, in order to identify buyers.

This plan to sanction online cigarette buyers comes on the back of a new health bill in France which includes various measures aimed at cutting smoking rates in France, such as outlawing smoking in a cars with child passengers, raising prices and banning cigarette branding.

The branding ban, seeking to strip packets of logos and replace them with warnings and shocking images, came under fire from North Carolina's Pat McCrory, governor of America’s biggest tobacco producing state.