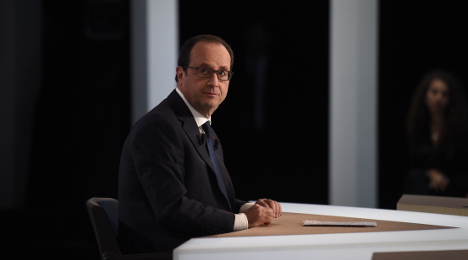 In a rare prime-time television interview exactly half-way through his five-year term, a defensive Hollande reiterated a pledge not to run for re-election in 2017 if he did not manage to bring down unemployment.

"I've got a thick skin. For two-and-a-half years, I've been hanging on," said Hollande, who has endured a series of setbacks and is languishing at an all-time low in the polls.

"I have made mistakes. Who hasn't?" said the president.

"Yes, we should have had more growth. Everyone was wrong. Everyone thought there would be a recovery."

Sometimes appearing rattled, at other times jovial, Hollande faced a fierce grilling from four members of the public, one of whom, a businesswoman, chided him for using overly official language, exhorting him to "speak French".

With unemployment stubbornly refusing to go down and Marine Le Pen's far-right Front National (FN) gradually making gains, the show was seen in France as a last-ditch opportunity to reignite his presidency.

"It's the programme that will save the president. Or not," said centre-right daily Le Figaro, adding that the show was "all or nothing" for the embattled head of state.

Two and a half years after winning the keys to the Elysee Palace, the president who portrayed himself as "Mr Normal" finds himself in the abnormal situation of having to defend his right to run for a second term.

With an approval rating at a historic low of 12 percent and a staggering 97 percent believing he has failed on the economy, more than eight in 10 French people say they do not want Hollande to run in the next election in 2017.

His record so far, especially on the economy, has been little short of disastrous. Unemployment has risen 27 months out of the 30 he has been in charge and growth has ground to a halt.

And Hollande reiterated Thursday that he would not stand if he did not live up to a pledge to cut the jobless rate by the end of his term.

"Do you think I can say to the French people, 'I didn't manage it for five years, but I promise I'll do it in the next five?' It doesn't work like that."

"If I don't manage it before the end of my term, do you think I will go before the French people" in 2017?

"The French people would be unyielding and they would be right."

He vowed to go "to the end to reform France… to make it stronger in the two and a half years I have left."

The main flank of his reform drive is his much-heralded "Responsibility Pact", some 40 billion euros in tax cuts for business financed by slashing some €50 billion from public spending.

He promised that from next year, there would be no additional tax "on anyone".

With the political right engaged in an unseemly leadership scrap sparked by the comeback of former president Nicolas Sarkozy and a left-wing rebel group splitting the Socialists, the FN is gaining in popularity.

A recent poll showed Hollande would lose heavily to Le Pen in the first round of a presidential election if one were held now, winning only 13-15 percent of the vote.

Asked about a possible repeat of the shocking result of 2002, where the FN candidate Jean-Marie Le Pen got through the first round of the presidential election, he said: "What has happened before can happen again."

"Why are the French turning to this party. It's because they have stopped believing. I want to convince them (that) … leaving the euro would not be entering the 21st century."