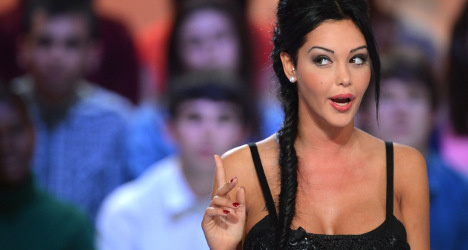 Nabilla, has been arrested on suspicion of stabbing her boyfriend. Photo: Miguel Medina/AFP

A French reality TV star whose trademark "Hello? I mean hello?" expression earned her both fame and national derision has been detained on suspicion of stabbing her boyfriend in the
chest, police said Friday.

Nabilla Benattia, 22, who denies any wrongdoing, rose to fame last year when a clip of her uttering those words in horror after learning that fellow female contestants had not brought shampoo with them on a show went viral.

Emergency services were called to a hotel in Boulogne-Billancourt near Paris at around 2:30am on Friday morning after the 22-year-old, who has now become a television commentator known only by her first name Nabilla, apparently had a fight with her boyfriend Thomas Vergara, whom she met on a reality TV show.

Vergara had several knife wounds to the chest and "his condition is considered serious" although not life-threatening, said police and prosecutors. He is refusing to file a complaint despite the serious nature of the attack, reports say. The weapon used was reportedly a small knife.

Nabilla is due to be questioned on suspicion of "attempted homicide."

In her initial statement she said the couple was assaulted near the hotel by three people and Vergara was injured when he tried to stop them, another police source said.

Prosecutors said Nabilla herself called the emergency services, saying there had been a fight outside the building after "the couple returned by taxi from an evening out." She said Vergara only realised he was injured when they got to their room, they added.

"After checking, police officers do not confirm these statements," prosecutors said, pointing to the fact there was no trace of blood outside the hotel.

A police source added that video-surveillance images showed that the two arrived separately and that Vergara seemed fit and healthy when he entered the building.

Nabilla's famous expression spawned countless parodies, including one video in which she calls a visibly irate Hitler, and inspired several advertising campaigns, including one from Ikea, prompting the buxom brunette to have it registered as a trademark.

Since then she has dominated the gossip magazines, modelled for Jean Paul Gaultier, declared that she wants to be “a businesswoman like Kim Kardashian” and, in the first step towards this, launched her own clothing line in September.

Nabilla was previously imprisoned for a month in her home country of Switzerland in 2009 for a fraud case.