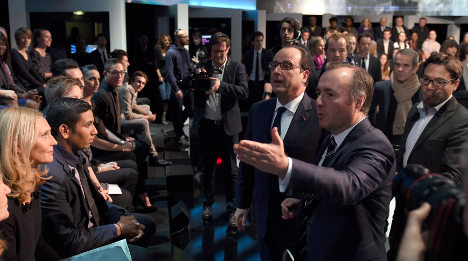 François Hollande meets the French public, but did he convince any of them that is he is the right man to lead France? Photo: Martin Bureau/AFP

He might have pulled in 7.9 million viewers – around 30 percent of the total TV audience – but how many of them were convinced by what he had to say?

If the reaction of the French press is anything to go by, not many.

Both the substance and the style of his television appearance, which saw him grilled by members of the public in front of a live TV audience, were criticised by the press.

“He didn’t have much to say and he took a long time to say it,” Le Figaro said.

Criticism from a newspaper which regularly lays into Hollande and his attempts to govern France may not be a surprise, but Le Figaro wasn't the only newspaper to lambast the president’s performance.

OPINION: 'One day France will be grateful to Hollande' Le Parisien described Hollande's appearance as a “disturbing demonstration of the difficulty for Hollande to find the willingness, the strength, to reassure the French people, who still have so many reasons to doubt him.”

“By confirming his policy of austerity, he has reinforced the disappointment of the left without appeasing the disbelieving right,” said the paper.

Left-wing newspaper Libération was slightly more kind, saying: “François Hollande confronted the headwind with vehemence and with honesty, saying that the efforts required, will pay off in ten years' time."

It added: “What was missing? Talking to the left.”

“If he was hoping that by showing up before a panel of carefully selected French people and chit-chatting in a mundane manner about various problems, that he could change the opinion of  the public, then he was very much mistaken,” French politics professor Philippe Marliere from University College London told The Local on Friday.

“It would never work, because his authority has been seriously undermined and showing up on TV and having so little to say in terms of policies and actions, is adding insult to injury.

“The French people are not happy with the way they are being governed and this show was too gimmicky,” Marliere added.

French political analyst Olivier Duhamel was also scathing: “He was tedious, to use a polite term. This program was made to kind of create an empathy between him and the French. That was the goal, but I believe this goal has not really been achieved.”

Duhamel believes Hollande was too polished to appear genuine.

“He knows every issue perfectly and on every issue he responds very precisely, like he’s a technocrat. It’s annoying. He became a super minister but not a president,” Duhamel added.