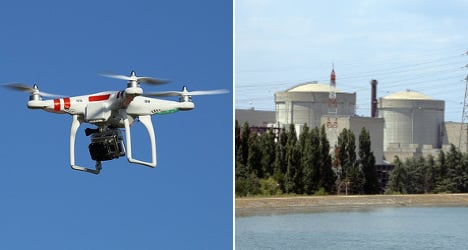 Who is behind the mysterious drone flights over France's nuclear power stations? Photo: Don McCullough/flickr/AFP

France’s state-run power company EDF rang alarm bells last week when it announced it had filed a complaint with police after detecting the small unmanned aerial vehicles zipping over not one, not two, but seven atomic plants in October.

Since then, more have been spotted and there have been at least 16 fly-overs throughout France, usually at night, leaving jittery authorities clueless as to who is piloting these helicopter-type machines at a time of heightened vigilance in the face of terror threats from Islamic extremists.

France’s minister for the environment Ségolène Royal admitted this week that authorities didn’t have a clue who might be flying drones over power stations, which is illegal in France.

On Wednesday it appeared the mystery might have been solved when three youths – two men and a woman – were caught red-handed carrying a drone, just 100 metres from the power plant at Belleville-sur-Loire.

However, on Thursday authorities appeared to dismiss their involvement with the series of drone of flights that has caused so much consternation.

So who is manning the controls of the drones and should we be worried?

“The first thing to say is that it’s not people having a bit of fun; the people behind this are professionals,” author and air safety expert Christophe Naudin tells The Local.

“The drones used are worth up to $30,000 and can be operated from a long distance away, and can work on auto-pilot," Naudin says. “These are not the type of drones used by amateurs to take films, they are used by real pros.”

Naudin dismissed the idea that Islamist terrorists could be behind the flights, suggesting it was much more likely that environmental extremists were responsible.

The finger of blame was immediately pointed at Greenpeace, who have long campaigned against the use of nuclear power in France, and regularly carry out protest stunts to highlight a weakness in security around the country’s nuclear plants.

“If it’s not Greenpeace, it could be a group acting for Greenpeace,” says Naudin. “There are movements who think Greenpeace are too soft and need to be more extreme.

“If it’s not [Greenpeace] then it could be a group linked closely to them. They have the funding to carry out this kind of operation, but could have asked another group to do it so it doesn’t affect them,” he said.

Naudin says whoever is behind it, the stunt is aimed at focusing the public’s attention on the security, or perhaps lack of it, around nuclear power stations.

“They want to scare the public and create some kind of psychosis and it appears to be working,” said Naudin, who believes the group may raise the stakes in the coming weeks.

“They’ll want to do something more impressive to show they have the capacity to drop something, like a paint bomb, on to the plant. It would be a symbolic act,” he said.

But should we be worried about the prospect something far more deadly being dropped on to a nuclear power station from a drone?

“At the moment these type of drones are too small to have the capacity to carry enough explosives to damage the structure of a nuclear plant," Naudin says. “But I’m not saying this won’t change in the future."

France's nuclear plants are built to withstand the impact of a Boeing 707-type plane – a mid-sized aircraft that carries up to 189 passengers – but Naudin said the prospect of a huge modern passenger plane like an A380 crashing into the site would constitute a real security threat.

Naudin warned that such drones could target adjacent buildings not designed to withstand a huge shock, such as administrative offices, which would create a "psychological shock."

He believes the government, which has already launched a probe into the flights, will be forced to act by bringing down the drones using lasers that can melt the devices.

In France, aircraft are not allowed to fly within a five-kilometre (three-mile) radius and a 1,000-metre altitude of a nuclear plant.

For their part, Greenpeace says it has nothing to do with the stunt, with a spokesman for the environmental group telling The Local on Thursday that “we insist we are not involved in these flights whatsoever”.

Asked who they think might be behind them, he said: “It’s not our job to answer this question. It’s up to the French authorities to provide an answer and also to ensure the safety of the nuclear sites.

“They should not take the easy option and blame anti-nuclear movements."