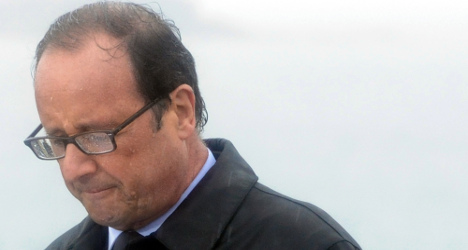 Will "France's most unpopular president ever" François Hollande one day be thanked by the French people for what he has done? Photo: AFP

These days the name François Hollande usually appears followed by the words – “France’s most unpopular president ever”.

With opinion poll after opinion poll  – including one published this week to mark the half-way point of his presidency – showing his popularity levels hitting new depths (12 percent approval rating according to the latest), there seems no way back for the self-dubbed “Mr Normal”.

While most French political analysts suggest Hollande has little hope of winning or even standing at the 2017 presidential election, one of them, Bruno Cautres, from the Centre for Political Research at Sciences Po (CEVIPOF), says Hollande’s image will eventually recover one day in the eyes of the public who seem to detest him so much.

“In the future the French people will look back at Hollande and think, he was a man who perhaps didn't have the charisma to be president, but that he was honest and that he sacrificed himself because of the economic situation and the public deficit,” Cautres tells The Local.

“He acted in the general interest of France, but he’ll need to wait before people thank him for it,” Cautres says.

Cautres believes Hollande will benefit from the same hindsight that sees former president Jacques Chirac fondly remembered in France, despite a conviction for corruption.

“Unpopular presidents become far more popular when out of office,” he says. “For Jacques Chirac, people remember his charisma and his decision not to join the Iraq war. For Hollande, he will be remembered for being weak, but also that he sacrificed himself to reduce the deficit.

“If the next president manages to get the deficit down to under three percent of GDP, he will be obliged to recognize what Hollande did,” says Cautres.

SEE ALSO: How Hollande can save his presidency Hollande’s dwindling popularity is due to the fact he has isolated his support base among the left, who wanted him to stick to his pre-election promise to turn away from austerity and implement actions that would fittingly follow his famous words that his “real enemy was the world of finance”.

Instead Hollande has taken a more liberal economic path as he tries to appease Brussels and Berlin as well as big business in France.

While powerful business organizations like Medef welcome his flagship Responsibility Pact – which involves €40 billion of tax breaks for companies, funded by €50 billion of public spending cuts – those on the left accuse him of pandering to big business and the wealthy.

After his election in 2012 not many would have imagined him appointing former Rothschild banker Emmanuel Macron as the country’s economy minister or indeed have seen his PM Manuel Valls proudly declare "I love business".

But Cautres says Hollande has realized, rightly, that reform in France is only possible if it is carried out by the left.

“One of the reasons why France struggles to reform is because the very word 'reform' has ideological connotations. If a right-wing president tries to do it, he’s accused of lacking solidarity etc and there is uproar.

“It has to be done by the left. It’s the only way it can work in France. François Holande is putting through reforms that Sarkozy should have done. Under the previous president the country’s public deficit vastly increased.”

Part of Hollande’s problem, Cautres says, is the economic situation he faced when he took over the reins from his predecessor.

“Whatever way you look at it, we can’t ignore the fact France has a huge problem with the public deficit. Those on the right say Hollande is not cutting it quickly enough and those on the left say it should not be his priority, which should be growth,” he said.

Despite appearing to be a lame duck, Hollande is not quite ready to throw in the towel yet.

He will make a prime time TV appearance in France on Thursday night during which he will speak to the nation and hope to convince them, once again, that he is the right man to steer the troubled ship through ever choppier waters.

Hollande has somewhat of a reputation as a comeback king, once rallying from an approval rating of three percent to win the Socialist primary.

"He went through a low patch in September," one aide told AFP. But now "he is fired up. He believes in it. He's trying to bounce back."

But with the odds stacked against him and most of the population apparently wishing he was gone, Hollande may simply have to wait a little longer to bounce back.

“In a few years people will look back and commend him for what he did,” Cautres says.