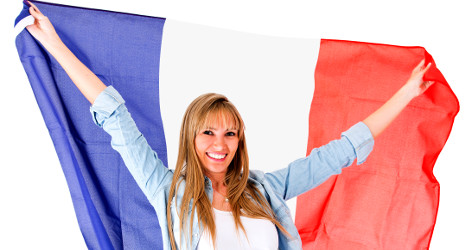 French is alive and well it seems and will be spoken by more than 750 million people around the world by 2060. Woman with French flag: Shutterstock

Those who say French is a dying language may need to think again.

A report published by the International Organization of La Francophonie (OIF) revealed that the number of French speakers has grown by 25 percent since 2010 and will increase almost threefold by the year 2060.

According to the OIF, the number increased from 220 million in 2010 to 274 million in 2014, making French the sixth most spoken language in the world after Mandarin, English, Spanish, Arabic and Hindi. That number will increase to 767 million by the year 2060, the OIF predict.

Although French is no longer the official language of diplomacy and has been overtaken by English in the EU, in parts of Africa the language is booming.

"French is benefiting from the demographic growth of sub-Saharan African nations," the OIF's outgoing secretary general Abdou Diouf said.  The region accounted for 15 percent of the reported increase. There are 37 Francophone countries, in which French is either an official language or is spoken by at least one in five people.

However, of the 274 million people capable of speaking French worldwide, only 212 million of those use the language on a daily basis, representing a rise of seven percent on the equivalent figure from 2010 – according to the report, which also acknowledged that more resources were needed to confirm the trends.

While the figures may make positive reading, especially for organizations like the Académie Française, whose mission it is to promote and protect the French language, Clément Duhaime, Director General of the OIF, fired a word of warning.

He welcomed the dynamism reflected by the organization's report, but stressed the need for investment in education to maintain the spread of French.

"If there is no educational facilities and training of teachers, young people could quickly turn away from French", he said, calling the language “a giant with clay feet”.

The news could mean a boost for French overseas interests, which the country is hoping to increase in order to bolster the struggling economy. Having lost ground to English over the years exploiting the increase in French speakers in Africa could help drive economic growth.

President François Hollande commissioned a report in August which found that countries with the same language do 65 percent more business with each other than those that do not, and has tasked Foreign Minister Laurent Fabius with developing overseas growth opportunities, focusing on the African market.

The report claims the future of French is also bright:

“Long-term, based on projections of the UN, the population of those countries which have French as an official language will together exceed that of those with other common official languages: German, Portuguese, Spanish and even Arabic," it said.

The report in figures:

A recent study commissioned by French bank Natixis came up with similar findings earlier this year, concluding that by 2050 French could be the world’s most spoken language, with a potential 750 million people speaking it. It also attributed the rise to the population surge of Sub-Saharan Africa.

Others were more sceptical, with Alexandre Wolff from the Observatory of the French Language responding to the Netixis study in Challenges magazine saying: “In reality English will remain the most used language in the world by 2050. But on the other hand it is possible [for French] to achieve such a result if we just take into account the inhabitants of countries where French is the official language.