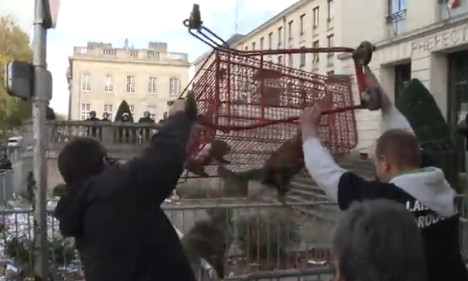 The disturbing video shows a group of farmers kicking coypus, more commonly known as river rats, during a protest in Nantes on Wednesday.

The farmers turned out in front of the city's local authority building to protest against restrictive economic and administrative regulations as well as the influx of cheap foreign produce.

After reportedly dumping manure and dead coypus and wild boar in front of the offices during the day, the farmers threw a shopping trolley (cart) containing live coypus over the railings surrounding the building.

It was captured on video by French TV channel Télénantes. One of the animals appears to be squashed by the cart, while others are kicked to keep them inside the barrier. At one point a farmer also sprays the rodents with a can of red paint.

Some of these scenes may shock viewers

“Coypus are like Ségolène”, one of the farmers tells Télénantes in the video, referring to France's Ecology Minister Ségolène Royal. “They are pests.”

The footage sparked outrage among viewers with many taking to Twitter to vent anger over the behaviour of the farmers.

Green party politician Jean-Vincent Placé tweeted that comparing the “poor sadists of the FNSEA [farmers' union]" to pigs would be “defamatory towards animals”.

The Brigitte Bardot foundation, an animal rights group, called the acts cruel and vowed to press charges against those involved.

Wednesday saw demonstrations by farmers across the country including one at the Place de la République in Paris, where farmers handed out free fruit and vegetables to raise awareness of their situation.

But the stunt with the coypus was not the only controversial act in the nationwide protest.

On Tuesday, farmers dumped 100 tonnes of manure and rotten vegetables in the centre of Charentes, south-west of Paris, and sprayed manure over the local authority building in Toulouse.