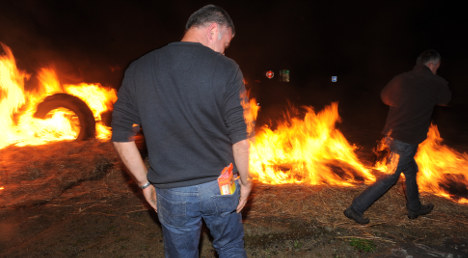 A group of more than 300 farmers dumped around 100 tonnes of manure and rotten vegetables in the centre of Chartres on Tuesday in protest at falling food prices.

The manure and veg dump was part of a nationwide series of protests set to continue on Wedesday in towns and cities across the country.

The demonstrations have been called by two of France's main farming unions, the FNSEA and Jeunes Agriculteurs (Young Farmers). They are protesting against regulations and controls as well as the influx of foreign products.

Farmers in Chartres, south west of Paris, assisted by some 30 tractors, dumped the slurry and rotting food in front of the offices of the agriculture department and town hall.

On Wednesday manure was also sprayed over the local authority building in the south western city of France. (See the Tweet below)

The protesters, from the FDSEA union, are "fed up" with the "increasingly crazy constraints and charges" faced by farmers, said union leader Jean-Michel Gouache.

He denounced the "collapsing prices of cereals, milk and vegetables, caused in part by the sanctions on Russia" as well as rising fertiliser prices.

Russia imposed a ban on agricultural products from the EU earlier this year in response to European sanctions over the Ukraine crisis.

In Paris a group of farmers stoppe food trucks delivering products to the finance ministry at Bercy, pointing out that many of the lorries contained fruit and veg from abroad.

"The finance ministry needs to set the xample when it comes to Made in France and it's not the case. We're exasperated," said Samuel Vandaele from Jeunes Agriculteurs.

Protests are planned in towns and cities acorss the country, which will include, go slows through and road blocks.

In Paris however farmers plan to hand out free fruit and veg.