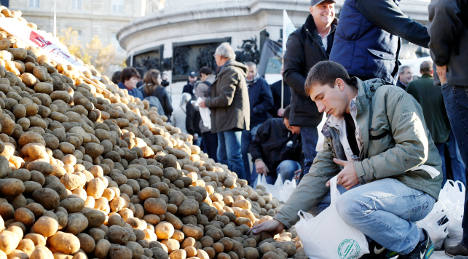 Between 700 and 800 farmers from the Paris region showed up for a demonstration at Place de la République in Paris on Wednesday, bringing in some 60 tonnes of potatoes and 20 tonnes of onions, apples and pears, all grown in the region.

A banner reading "I want to eat French products today and tomorrow" stretched across the Monument à la République in the middle of the square.

French farms are threatened by the collapse of prices for cereals, milk and vegetables, caused in part by the sanctions on Russia, said another union leader, Damien Greffin.

Daniel Prieur, deputy secretary general of FNSEA told The Local on Wednesday that French farmers are hampered by rules and regulations, making them less competitive than their European neighbours.

"I am a citizen of France and I believe in Europe. It doesn't bother me if a product comes from another country to France if it has been produced on fair terms. But that's not the case. Farmers in Germany for example are far less weighed down by rules and regulations and labour costs than we are," he said.

"In terms of quality of produce we are competitive, but for everything else we are not," Prieur added.

At Place de la République French farmer Arthur Courtier told The Local: “The goal is to make people aware of the fact that there’s a lot of import of foreign products from the European Union that don’t adhere to the same norms, and are produced much more cheaply.

“We’re trying to entice people to buy more local produce instead of imported goods. The problem is there’s too big a discrepancy between the price we sell at and the price the consumers pay.”

The FNSEA, which was staging other protests across the country on Wednesday, is calling for "food patriotism" and demanding that two out of three dishes served in public canteens be made using French produce.

Another farmer, Cyrille Milard, from the Seine et Marne department told The Local they preferred to hand the food out than see it wasted.

“This is a symbolic action. Often farmers don’t harvest their produce because it costs too much and isn’t worth it, so it goes to waste. Instead of doing that we decided to give it to the Parisians to help get our message across.”

Milard blames the French government for not understanding agriculture and imposing too many “restrictions” and “controls”.

“We are outraged by this. We have a government that doesn’t hear us. The open market hurts us.

“Markets need to be regulated. The borders are open, that’s Europe, and we import 80 percent of vegetables and 80 percent of meat. While this happens our farmers quit the profession every week and every day because they can’t sell their produce. We produce high quality goods but can’t sell them,” said Milard.

At dawn, a group of about 20 activists known as the Young Farmers went to the edge of the city to check the produce heading to the canteens of the economics ministry.

"Tomatoes from Morocco, apples from Italy, unlabelled produce: the economics ministry should set an example of Made in France, and that is not the case," said Samuel Vandaele, the group's deputy leader.

In other parts of France farmers chose an alternative method to express their anger.

In the south-western city of Toulouse a line of tractors and pickup trucks unloaded manure outside a government office.

"They are cowboys who come to us to tell us we are not in compliance (with a new regulation on fertiliser)", one official shouted through a megaphone.

In the central city of Tours, some 350 farmers dumped manure and slurry outside city hall, brandishing posters reading "Manure, we can't spread it any more. You can have it, help yourselves."

Some 63,000 farms have been ordered to make often costly investments to come into compliance.

In western Nantes, in the heart of France's breadbasket, hundreds of farmers and breeders wore T-shirts emblazoned with the slogan "Proud to Feed You" and "Let Us Produce", dumping rotten leeks and manure as well as feathers and straw outside the main administrative building.

In the Champagne town of Chalons, more than 1,000 winegrowers — who do not normally join in farmers' protests — staged a demonstration with the slogan "Get Off Our Backs".