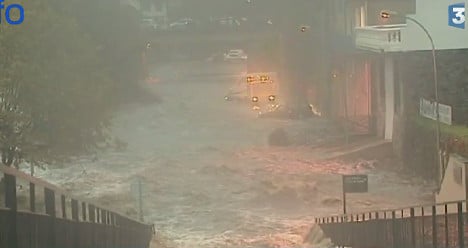 On Monday night the severe weather caused havoc in the Ardèche department and left more than 6,000 homes without power. Firefighters were called out to deal with almost 100 incidents.

“We have an enormous amount of damage, with walls collapsing onto roads,” said deputy mayor of an Ardèche village Michel Aymard, who added that it was the third time in two months the region had been hit by devastating floods.

“We’ve only just received the financial aid from the government for damage caused by flooding in 2013,” said Aymard.

No injuries have been reported.

Winds reached up to 160km/h in parts of the Rhône Valley overnight on Monday.

The country’s meteorological service Météo France said heavy rains will continue in the region until Wednesday morning. As much as 450mm of rain could fall before the storms pass.