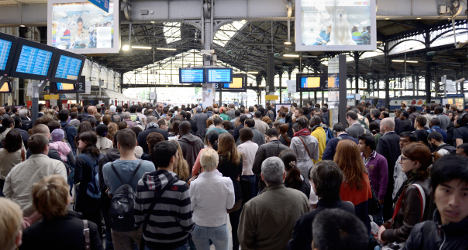 Train services across France and the Paris region are set to run at 97 percent of normal service on Tuesday, despite a rail and Metro strike by the country's largest trade union "in defense of public transport".

That represents good news for the capital's commuters, who had been warned of travel chaos after the influential CGT union confirmed that transport workers will strike in response to contentious rail reforms approved this summer.

France's national rail operator SNCF promised a "normal service" would be running on all the main lines as well as in Île-de-France and on the RER commuter service.

However disturbances are expected on some Intercity and TER lines, SNCF said, affecting services to and from the towns of Tarbes, Beziers, Agen, Orleans and around the suburbs of Marseille.

In a boost for commuters in the French capital RATP, which runs Paris's transport network – including the Metro, RER trains and tram services – said services will run at "normal or almost normal".

However bus services in the capital could be most disrupted by the industrial action.

Workers at France's government-owned railway SNCF will not return to work until 8am on Wednesday, while those at RATP are expected to return at 6:30am on Wednesday.

CGT has called for the strike to denounce the same rail reforms which prompted the two-week SNCF strike which brought train traffic to a standstill across the country this summer.

The reform brings together rail operator SNCF and track manager RFF, as well as opening parts of the sector up to competition.

It aims to tackle the rail sector's soaring debt, which stands at more than €40 billion and is set to almost double by 2025 if nothing changes.