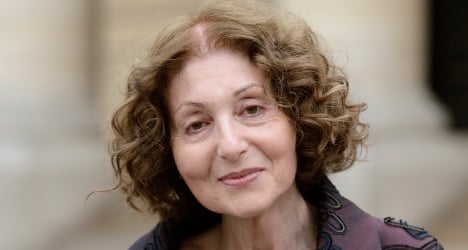 Brett's sixth novel tells the story of an eponymous heroine who arrives in London in 1967 and proceeds to interview the biggest names in music from Mick Jagger and Janis Joplin to Jimi Hendrix and Cher.

Soon, however, she starts to wonder if the questions she is asking are in fact substitutes for questions about her parents' past.

Reacting to the award – announced to the press at a Parisian restaurant – Brett told reporters she was "ecstatic".

"I am so proud to have won this prize," she said. "I first came to Paris when I was almost two years old. My parents were survivors of Nazi death camps and we were here on the way to a new life.

"I have a photograph of myself on a carousel in (central Paris district) the Marais and I look overjoyed. You can see I already loved this city," she said.

Brett said that, like her character Lola, she too had been sent to London as a rock journalist in 1967.

Without the ever-present managers and PRs that surround stars today, she was able to get close to many of them, she said, adding that it was a conversation with Jimi Hendrix that provided the idea for the book.

"I was sitting in Mick Jagger's apartment… discussing hair curls with Jimi Hendrix," she said.

"We both had very curly hair. His much more curly than mine and that led to the basis of 'Lola Bensky'," she said.

Brett's Jewish parents, Max and Rose, were both sent to Auschwitz during World War II.

Both lost their entire families during the conflict and the novelist has said her father agonised constantly over his dead relatives throughout her childhood.

"I lived in a house where the dead were more present than the living," she told a journalist in 2012.

Some of the people Brett interviewed as a rock journalist would soon be dead themselves and because of her own family background they struck a cord with her.

"It was a short time after the war, the 1960s, (and)… I was in the middle of a whole lot of people who were hurtling towards their death," she said.

"They didn't know it – Janis Joplin, Jimi Hendrix – they were all going to be dead in a few years and I came from people (my family) who were struggling to live and who had been surrounded by death so it was a very, very meaningful book for me to write," she added.

The winner of the Prix Medicis's main category, meanwhile, was French author Antoine Volodine, for "Terminus Radieux" ("Radiant Terminus"), set in Siberia in the aftermath of nuclear disaster.

Volodine is the main pen name for a writer – a former professor of Russian – who also goes by the names Elli Kronauer, Manuela Draeger and Luitz Bassmann.

Under the name Volodine he has written around 20 novels.