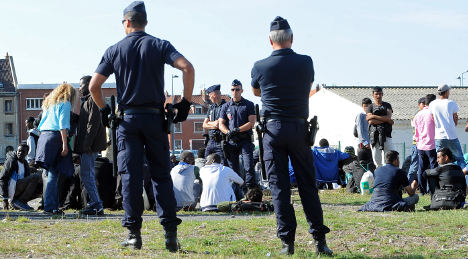 On a trip to the port city in northern France, Bernard Cazeneuve said a day centre would be built to cater for the thousands of migrants camped out in the town.

The centre, which would not provide accommodation, would have a budget of €3 million a year and offer migrants services such as legal advice for asylum applications as well as a place to shower, eat and drink.

The announcement came as a surprise given that in August Cazeneuve rejected the idea, as he didn’t want to create “a new focal point for migrants”.

Authorities in France have been under increasing pressure to deal with the ongoing crisis in Calais, which is now home to around 2,500 migrants, who are living in makeshift camps around the city.

In recent weeks France has been forced to send hundreds more police to the area as tensions between different groups have boiled over and erupted into street battles.

Humanitarian groups working in the city told The Local on Tuesday that the day centre was just a half measure which does not respond to the needs of migrants.

“The government is not putting the necessary means in place to solve the problem in Calais,” Jean-François Corty from Medecins du Monde said.

“We are dissatisfied because this day centre does not correspond to what is needed, because the migrants will still be sleeping in the streets,” he said. “This will do nothing to calm the tensions. It’s just a half measure”.

France has been reluctant to build a centre for migrants ever since it closed the infamous Sangatte immigrant detention centre in 2002.

Housed in a former hangar and run by the French Red Cross, Sangatte was home to a perpetually renewing population of migrants – many of them Afghans and Iraqi Kurds who hoped to sneak through the under-sea Channel Tunnel to Britain.

But aid groups said the centre ended up being run by mafia gangs.

Corty said what was needed now eres several centres around the region to provide accommodation for the thousands sleeping rough, hoping to make it to the UK.

“To avoid a repeat of Sangatte we need numerous centres run by professionals, who understand the needs of the migrants,” he said.