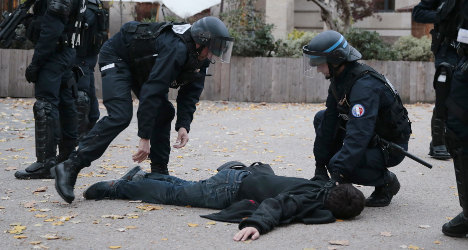 Police arrest a protester in Paris who had taken part in an illegal gathering in memory of an activist killed the previous week. Photo: Joel Saget/AFP

Protesters in several parts of France gathered in a sometimes tense atmosphere Sunday in memory of an eco-activist who was killed last weekend during a demonstration against a controversial dam project.

The gatherings in Paris and on the site of the Sivens project in the southwestern region of Tarn came a day after similar protests erupted in violence, leaving several demonstrators and police injured.

Remi Fraisse, 21, died last Sunday as people protesting against the dam project clashed violently with security forces, and investigations into the case suggest he may have been killed by a police concussion grenade.

In Paris Sunday, some 300 people got together in the northeastern Stalingrad district without prior authorisation, shouting slogans such as "police everywhere, justice nowhere", encircled by security forces who used tear gas when some tried to force their way past them.

According to the latest reports police stopped a total of 78 people in the area, some carrying "hammers, pliers, helmets, brass knuckles, firecrackers and incendiary devices," a police source said.

On the other side of the French capital near the Eiffel Tower, meanwhile, several hundred people gathered peacefully in memory of Fraisse.

And in the Tarn, more than 2,000 people took part in a silent march on the site of the dam project.

Fraisse's death in the protest – the first such tragedy in mainland France in nearly three decades – caused an outcry in the country and embarrassed the government, which was accused of not reacting quickly enough.

Local authorities subsequently decided to suspend work on the dam, though they have not scrapped it indefinitely.

Those opposed to the project say the dam will destroy a reservoir of biodiversity and will only benefit a small number of farmers, while supporters retort that it will ensure irrigation and the development of high-value crops.