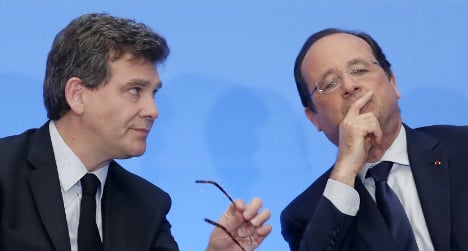 Sacked French minister Arnaud Montebourg pictured here with François Hollande has signed up to learn how to run a business. Photo:AFP

As industrial renewal minister and then economy minister, the man who is firmly positioned on the far-left wing of France's ruling Socialists had long been portrayed by the centre-right as the caricature of the anti-capitalist, anti-business politician.

But on Monday, the 52-year-old made his way to INSEAD in Fontainebleau near Paris where he has enrolled for a four-week "advanced management programme" that aims to transform "senior executives into great business leaders," according to the private business school's website.

Eric Ponsonnet, head of administration for INSEAD, said Montebourg filled in an application form in English in which he explained his past experience and detailed what he planned to do, before he was interviewed in English too and admitted into the programme.

According to people close to Montebourg, the former minister is planning to set up his own company before "doing politics differently".