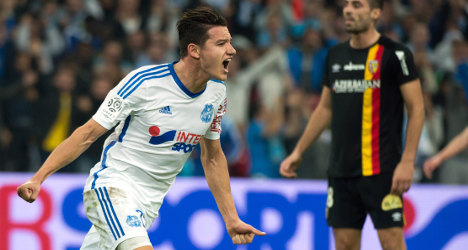 Marseille restored their four-point lead at the top of Ligue 1 on Sunday, beating Lens 2-1 at the Stade Velodrome despite a less than convincing display against their struggling visitors.

Nicolas Nkoulou headed Marcelo Bielsa's side into an early lead, but Lens drew level courtesy of Baptiste Guillaume and had chances to go in front themselves.

However, Florian Thauvin secured the points with his third league goal of the season on the hour-mark as Marseille got back to winning ways after suffering consecutive defeats in league and cup, holding on despite the late sending-off of Alaixys Romao.

With 28 points, OM are four clear of second-placed Paris Saint-Germain before they face their great rivals at the Parc des Princes in the biggest fixture in French football next Sunday.

A positive result in the capital against the defending champions would set them up for a sustained title challenge, but Bielsa will accept that his side need to play far better than they did against Lens if they are to take anything from PSG.

Nevertheless, the win meant it was a good finish to a difficult week for the south-coast club, who fell short of a club record ninth consecutive league win by losing at Lyon last weekend and were then eliminated from the League Cup at Rennes before a reported bust-up between Andre-Pierre Gignac and Brice Dja Djedje at the club's training ground hinted at divisions in the squad.

"Am I worried before the 'Clasico'? The match against Lyon was the best we have played this season, and tonight was not good," said Bielsa.

"I know what mistakes we made but I also know perfectly well the qualities of my team and what we are capable of doing."

Bielsa, who handed rare starts to Rod Fanni and Mario Lemina, saw his side strike early, as they have done on numerous occasions already this season.

The game was only 10 minutes old when a corner from the right was inadvertently helped on at the near post by Lens captain Jerome Le Moigne for Nkoulou to dive and head in.

Marseille had won every Ligue 1 game this season in which they had opened the scoring and few at that point anticipated a Lens comeback.

However, Antoine Kombouare's side, featuring six players aged 22 or under, including four teenagers, were not cowed and Benjamin Bourigeaud missed a chance to equalise before Guillaume did restore parity with a strike from inside the area after good work by Pablo Chavarria.

Indeed, Lens could have gone in front early in the second period, with Wylan Cyprien blazing over and Chavarria having an effort disallowed for offside.

But Marseille regained the initiative when a superb Dimitri Payet pass found Gignac, and Ligue 1's leading scorer turned provider as he cut the ball back for Thauvin to side-foot a shot into the roof of the net.

The dismissal of Romao left OM to play out the final 14 minutes of the game with 10 men and meant that Bielsa will have to do without him as well as Andre Ayew and Jeremy Morel against PSG.

But at least they held on to win the match, with goalkeeper Steve Mandanda making a crucial save to deny Yoann Touzghar in the fifth minute of added time.

Despite the defeat, Lens coach Kombouare said: "I never had any doubts about the quality of my players, about what they were capable of doing.

"We are disappointed, frustrated, but we have to congratulate Marseille for holding on."

Champions PSG came from behind to win 2-1 at Lorient on Saturday to maintain their unbeaten start to the campaign while Lyon went clear in third with a 3-1 victory at Nice.

Elsewhere on Sunday, Bordeaux moved back up to fourth by beating local rivals Toulouse 2-1 for their first win in four league outings, Marc Planus and Diego Rolan scoring for Willy Sagnol's side.

Meanwhile, Nantes made it seven league games unbeaten as they came from behind to draw 1-1 with Rennes in the Breton derby.