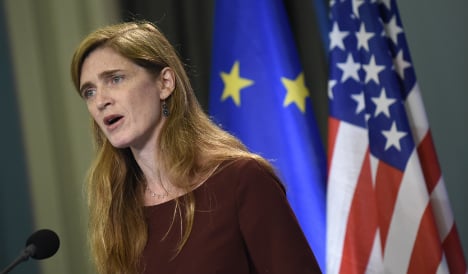 The US envoy to the United Nations said Guinea lacks a command and control structure to fight the disease of the kind that is already up and running in the country's English-speaking neighbours Liberia and Sierra Leone.

"I think the French can help with that, as can the Canadians and the Belgians," Power said, at a media event organized in New York by the Reuters news agency.

France has announced plans to set up Ebola treatment centers in Guinea and this week contributed an extra €20 million ($25 million) to international efforts following a UN appeal.

The United States took the lead in helping to manage the Ebola response in Liberia and Britain does the same in Sierra Leone, leaving France to address needs in Guinea, a former French colony.

"There is a command and control issue in Guinea," said Power, who spent four days touring the three countries at the heart of the outbreak.

"French-speaking countries can help in that way."

Power posted pictures on Twitter of the screening she underwent when she arrived at New York's JFK airport late Thursday and vowed that she would monitor her own health for 21 days, Ebola's incubation period.

The American envoy said she would check her temperature twice daily to ensure she is not developing a fever — the first warning sign of infection.

She described herself as "low-risk" given that she did not visit a working Ebola treatment unit during her trip.

Power praised Air France, Air Brussels and Morocco's airline for continuing to fly to the three countries, saying they provide a "lifeline" to ferry health workers in and out of the Ebola-hit region.

She also commended China for recently sending medical supplies and health workers to West Africa and expressed gratitude to Cuba, which was among the first countries to offer doctors and nurses.

The United Nations has described the Ebola outbreak that has killed some 5,000 people as a threat to world peace and security, and issued repeated appeals for aid.

UN diplomats privately say China scaled up its contribution after being asked and attention has now turned to Russia and Japan as two countries that could be more generous.

An Ebola trust fund set up last month to provide quick access to funding now totals $117 million and an appeal for $1 billion for UN aid agencies has reached 55 percent of its goal.

The United Nations and in particular its global health agency, the WHO, have come under fire for their slow response to the Ebola crisis, which came months after the medical charity Médecins Sans Frontières raised alarm.

Power declined to point the finger at the UN or the WHO for the failings, saying "we need to be quicker next time, and that means all of us."