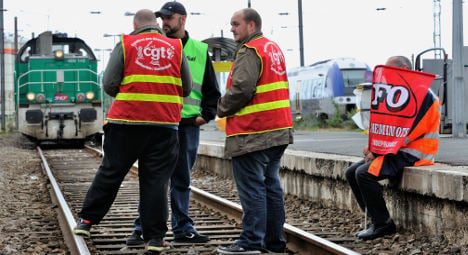 A train and metro strike is set for Tuesday in France. Photo: AFP

One of France's largest unions has warned that the train and Paris Metro workers it represents will strike on Tuesday in response to the rail reforms lawmakers approved this summer.

But because the workers must file their warning 48 hours before striking, we won't have a clear estimate on the extent of the disruption until this weekend.

SEE ALSO: Why the French are right to strike

So far we know that CGT workers at France's government-owned railway SNCF are expected to walk off the job at 7am on Tuesday and have said they'll return at 8am on Wednesday, French daily Le Figaro reported.

Meanwhile workers at Paris's public transportation authority are expected to down tools at 10:30pm on Monday and return at 6:30am on Wednesday.

Employees at Paris's airports and rail workers outside the capital have also warned their bosses they intend to strike. But no further information was available on how their plans would impact travelers.

CGT has called for the strike to denounce the same rail reforms which prompted a two-week SNCF strike that snarled train traffic across the country this summer. Despite the travel chaos sparked by the strike, French lawmakers adopted the contentious railway sector reform in late June.

The reform brings together rail operator SNCF and track manager RFF, as well as opening parts of the sector up to competition.

It aims to tackle the rail sector's soaring debt, which stands at more than €40 billion ($54 billion) and is set to almost double by 2025 if nothing changes.