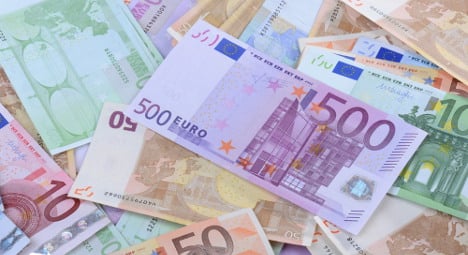 The teenager was told last week that she must pay back €10,000 in just 15 days. Euros: Shutterstock

The girl’s father, Stéphane Herault, who worked as a fisherman, died in 2013 while trying to save a colleague who had fallen into the sea during a stopover.

As a result his now 13-year-old daughter Océane was entitled to €5000 as well as an “orphan’s pension” of €500 per month from the National Institution for Disabled Marines (ENIM).

However, in a bizarre bureaucratic twist, the teenager received a letter last week telling her that she had just 15 days to pay back the €10,000 she has so far received.

The order was made following an appeal by the ship owner who said that Océane was not entitled to the money because high levels of alcohol had been discovered in Hérault’s system in an autopsy carried out the day after the accident.

“If we had known in the beginning that Stéphane Hérault was drunk during the incident, we would never have agreed to this allowance for his daughter,” he said, according to Le Figaro.

Reacting to the news, the girl’s mother Karine Béranger said: “It’s awful, this premium. It’s the only thing that she got from her father, who only left her debts.”

“Sure, the accident happened in his free time, but if he wasn’t a sea fisherman, he would never have been on board the boat. That seems obvious to me,” she said.

Béranger added that most of the money had been put in a bank account for Océane’s future studies.

“The rest helps her to pay for recreational activities, to improve her ordinary life a bit, which I can’t afford to do with my salary,” she said.

Béranger has now lodged an appeal with a Social Court.

For now ENIM has stopped demands for the girl to repay the money but has suspended the payments pending the court’s decision.

Meanwhile, Océane continues to receive another allowance of just €100 per month.