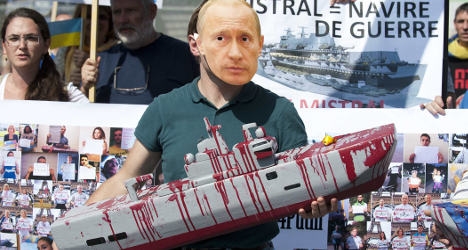 Paris faces mounting pressure from Western partners to scrap the deal over Russia's role in the Ukraine crisis. Photo: AFP

"Today the conditions have not been met," Michel Sapin told French radio, as Paris faced mounting pressure from Western partners to scrap the deal over Russia's role in the Ukraine crisis.

Sapin stressed there needed to be "a situation in Ukraine that tends towards normality, which allows things to calm down", adding that Russia needed to play a "positive role" before the warship could be delivered.

"On a certain level things are going better. From other points of view, there are still concerns, so today the conditions are not met," the minister said.

On Wednesday, Russian Deputy Prime Minister Dmitry Rogozin said the country's state-run arms dealer had received an invitation to attend a ceremony on November 14th for the handing over of the first of two Mistral helicopter carriers.

This was swiftly denied by the French manufacturer.

A spokesman for the naval defence group DCNS said it was waiting for government authorization to export the first ship, adding: "No delivery date can therefore be confirmed at this stage."

French Defence Minister Jean-Yves Le Drian said on Tuesday that the decision on whether to deliver the state-of-the-art warship to Moscow would be made in November.

Paris last month said it was postponing the decision to deliver the first of two Mistral-class advanced helicopter assault ships to Russia until November after fierce criticism from its allies.