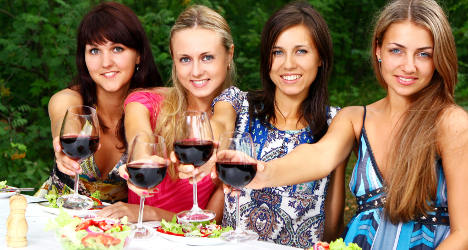 These are the French wines expected to be great this year. Cheers photo: Shutterstock

After record-low production in 2012 and 2013, France finally bounced back and is looking at a good crop this year according to the French wine co-operatives, which account for about half of French wine production.

The Indian summer weather after the cold and wet summer months was an unexpected surprise that undid a lot of the damage done to the crops by the chilly summer.

Here are the regions that expect to produce some great wines this year:

"Fortunately, we had a great September, hot and dry, which made it possible to wait for the perfect moment to harvest," Boris Calmette, the president of the French wine co-operatives, told French media.

The shift in weather boosted the grapes’ state of health, and has had a particularly positive effect on white varieties.

“It's a rare and interesting vintage thanks to this cool summer rescued by the good weather of September with cool nights," said Denis Dubourdieu, the owner of several chateaux in the Bordeaux region and director of France's authoritative Institute of Vine and Wine Sciences.

"There is a very good balance between sugar and acidity," he said.

Stéphane Héraud, the first vice President of the Federation of wine co-operatives in Aquitane said that “thanks to the eight weeks of warm weather in September and October, mature and unstressed grapes could be harvested in Bordeaux”.

A lot of the regions that have had a successful harvest this year are, in fact, the ones that were affected the most by the cool weather and excessive rain in 2012 and 2013. For example, some growers in Bordeaux and Burgundy saw their harvests nearly wiped out by several hailstorms.

This year’s turnout is certainly better than in the years before, but not all growers were able to fill their tanks.

The departments of Aude and Hérault in the Languedoc-Roussillon region were hit by hailstorms, which destroyed 35 to 40 percent of the harvest of farms in Bézier and Narbonne.

The Alsace region was spared from hail, but the harvest still didn’t come out as high as expected. On top of that, the stocks have dropped to a historic low.