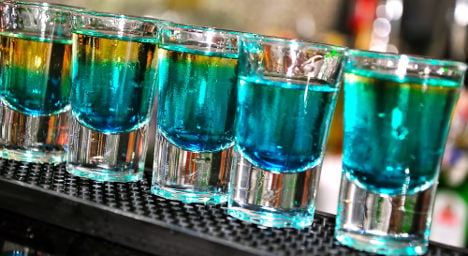 The man died the next day after falling into a coma. Photo of shots in a bar: Shutterstock

The victim, aged 57, had been out with friends at a bar in the centre of Clermont-Ferrand where he took part in a drinking competition where participants competed to see who could down the most shots.

The man was a clear winner after he took a total of 56 shots of vodka, rum and whisky in succession. But his victory came at a price.

As he headed home at around 2am with friends, he fell into a alcohol coma. He was taken to hospital but died the next day.

“Getting dead drunk used to be seen as degrading, now it’s seen as a positive thing,” Laurent Gerbaud, professor of public health at the Clermont Ferrand university hospital told France Info radio. “We are seeing a new type of competition emerge.”

Police are now investigating what responsibility the bartender has in the man’s death.

“The simple act of serving alcohol to a drunk person is an offence,” local prosecutor Laure Lehugeur told France Info. “After that you can take them to court for manslaughter, which today remains to be seen as the investigation is not over.”

If the bill is passes, people who encourage minors to drink excessively could face a year behind bars and a €15,000 fine. And anyone who incites others to “drink until drunk” could face up to six months in prison as well as a fine into the thousands. ALCOHOL
Do you know the limits for bringing alcohol and tobacco into France?
Url copied to clipboard!