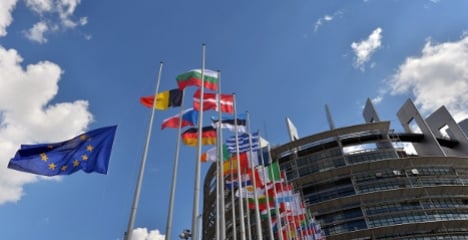 The European Commission cleared France's budget for 2015 after the country made last-minute changes to meet EU demands. Photo: Patrick Hertzog/AFP

The budget review covered all 18 eurozone countries, with the focus on struggling France and Italy after Brussels told them that their original plans fell well short of what was required to meet European Union norms.

"After taking into account all of the further information and improvements… I cannot immediately identify cases of particularly serious non-compliance which would oblige us" to reject the planned budgets, EU Economic Affairs Commissioner Jyrki Katainen said.

The Commission, the European Union's executive arm, gained far-reaching powers during the debt crisis to vet eurozone budget plans to ensure that member states did not exceed the deficit ceiling of 3.0 percent of gross domestic product (GDP).

France, however, had forecast a deficit — the shortfall between government revenue and spending — of 4.3 percent for 2015, saying it would not reach the EU target until 2017.

It could do no better, Paris said, because the economy had stalled and it needed more time to push through the difficult structural reforms needed to get the economy growing again.

That was clearly not good enough for Brussels, with Katainen demanding an explanation and proposals to remedy the problem.

In response, French Finance Minister Michael Sapin on Monday announced some "good news" — he had managed to find another 3.6 billion euros ($4.6 billion) to reduce the deficit.

"I think that France here is offering clarifications and elements that should allow us to stay on course," Sapin said, stressing that the government was making use of all the flexibility possible under EU rules.

For Italy, the problem is with the structural budget deficit — the underlying shortfall left after variables are stripped out.

Economy Minister Pier Carlo Padoan pledged to reduce the structural deficit by 0.3 percent of GDP in 2015, instead of the original 0.1 percent.

Italy also promised to do more to reduce its massive debt, put at 133.4 percent of GDP in 2015 and more than twice the EU ceiling of 60 percent. After weeks of mounting tension and fears of a stand-off with two of the EU's largest economies, the tone in Brussels changed markedly with the French and Italian measures.

Without mentioning any country by name, Katainen said that over the past two weeks the Commission had "carried out consultations with certain member states to request further information or to highlight some initial concerns.

"I want to welcome the fact that these member states have responded constructively to our concerns," he said in a statement.

Apart from France and Italy, the Commission also reportedly had reservations over the plans submitted by Austria, Malta and Slovenia.

Analysts said that while France and Italy appear to have scraped through they still had a lot to do to get a clean bill of financial health.

"The budget fight between the three capitals is not done yet," said Alan Lemangnen at Natixis investment bank.

"The Italian and French governments will certainly have to present updated structural reform programmes to justify (their route towards) compliance," Lemangnen said.

The Commission has been demanding that France and Italy introduce tough reform programmes to restore their competitive edge at a time when a modest eurozone recovery has run out of steam, with powerhouse Germany even showing signs of weakness.

"I have to remind you that the Italian economy is in one of its deepest and longest recessions ever," Finance Minister Carlo Padoan noted on Monday.