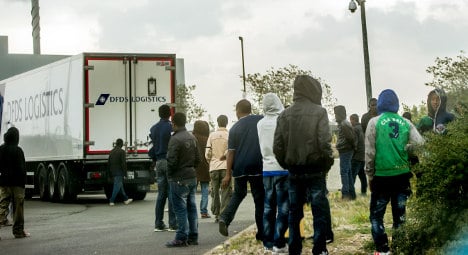 Speaking to a British parliamentary committee, Natacha Bouchart also said it was easier to get welfare benefits in Britain and that migrants viewed the country as an "Eldorado".

"I think the border should be on British territory because it's up to you to decide the migrants you want to let in or not," said the mayor, from the opposition centre-right UMP party.

Since 2003 the official UK border has been in France, in an attempt to stop illegal migrants reaching Britain to claim asylum.

She called for "joint measures on both sides to better regulate the flow and give serenity to the local populations in and around Dover and in and around Calais".

"The fencing is laughable and will only resolve the problem by a few metres," she said, referring to the perimeter barrier donated by Britain that was used to protect the NATO summit in Wales in September. Up to 2,300 migrants are thought to be in Calais and surrounding areas, overwhelming security forces as they make regular attempts to mob the port en masse to try and scramble onto trucks boarding ferries to the British port of Dover.

"You have to put the message across that there is no point going to Calais to get into Britain because Britain is no longer taking in migrants," she said.

The problem in Calais is not new — illegal camps of migrants have sprung up in the area ever since French authorities closed down the infamous Sangatte immigrant detention centre in 2002.

SEE ALSO: 'We need to tell migrants the UK is not El Dorado'

This former hangar run by the French Red Cross used to be home to a perpetually renewing population of migrants — many of them Afghans and Iraqi Kurds who hoped to sneak through the under-sea Channel Tunnel to Britain.

The centre had been a thorn in the side of British and French ties and was eventually demolished.

Authorities have announced they will open a day facility to allow migrants access to health care, toilets and bathrooms, but appear to have so far ruled out any permanent 24-hour centre.