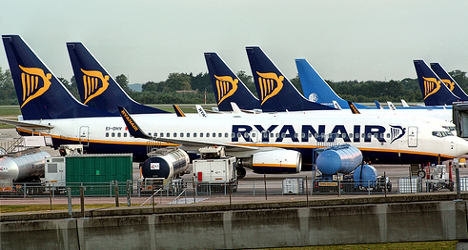 An appeals court found the company guilty of paying workers under Irish contracts to save money on payroll and other taxes.

Social charges in France are at around 40-45 percent, compared to 10.75 percent in Ireland.

The airline will have to pay damages to trade unions, France's social security system and pilots among others.

The court ordered that the company, headed by Michael O'Leary, must post the ruling on the doors of a terminal in the Marseille-Marignane airport for one month and publish the decision in four newspapers.

"We are very pleased with this ruling because this decision shows that Ryanair violates European law, which requires respect of French social legislation," said Claire Hocquet, a lawyer for the National Union of Airline Pilots.

In October 2013, Ryanair was ordered to pay nearly €9 million in damages and interest but the airline appealed the ruling in June 2014.

The case was focused on a facility in Marignane, near Marseille in the south of France.

The company based four planes and 127 employees at the site without applying French labour law or filling out tax declarations in the country.

Ryanair argued that it did not have a permanent base in the Marseille-Marignane area and that it was entitled to keep its workforce on Irish contracts.

Prosecutors said its claim was not credible because workers were living locally, and the airline had offices there.

Responding to accusations that the airline participates in social dumping and unfair competition, a lawyer for the company said during the appeal that "this caricature of a mean company that neglects the law, mistreats its employees and earns money borders on hypocrisy."

After the initial verdict, the company accused French authorities of pursuing budget airlines in a bid to protect flagship — and partially state-funded — Air France, from competition.

"When one doesn't make a profit from tickets, one needs to make it elsewhere. For Ryanair, it was the salaries that were low-cost, very low-cost," prosecutor Isabelle Pouey said.

The case is similar to that of another budget airline, easyJet, which in 2010 was ordered to pay more than 1.4 million euros in damages to unions representing crew for hiring 170 employees under British contracts at a Paris airport.

Ryanair hails itself as "Europe's only ultra low cost carrier," and one that has "revolutionized the air travel industry."

According to the company's site, they have the largest Boeing 737-800 fleet in Europe, with over 1,600 flights every day.

In September, Ryanair reported nearly 8.5 million passengers, an increase of almost half a million from the same month last year, in a difficult operating context for airlines generally.

But the airline has warned that annual net profits would come in at the lower end of expectations, and that it would cut winter capacity due to intense competition and falling fares in Europe.

RYANAIR
Ryanair demands that Air France give up French airport slots in exchange for state aid
Url copied to clipboard!