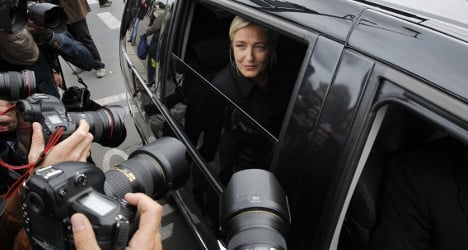 Marine Le Pen leaves few people indifferent in France, though sometimes the strong reactions she provokes can veer toward violence.

Such was the case on Monday afternoon when a group of young men waited for the political leader outside a supermarket as she did her shopping in the Parisian suburb of La-Celle-Saint-Cloud.

"Three or four youths asked locals to be sure it was indeed her," an unnamed police source told French daily Le Parisien.

Satisfied they had the right person, the group watched her get into her car and then began chucking rocks at the vehicle as she drove away. She was not hurt, but her car did suffer some damage.

No one claimed responsibility for the incident, which could have been an act of political activism or simple street violence. No arrests were reported.

It's the second high-profile incident in recent months that involved Le Pen and a her car. News broke recently that she'd had her driver's license revoked after losing all her points due to speeding tickets.

Le Pen has led her party to three victories in three major elections this year, which is the fruit of her effort to make the party more mainstream and the persistent economic crisis in France.

Supporters see her as a Joan of Arc-like saviour for France, while her detractors believe she hides racism and retrograde beliefs behind a populist persona.