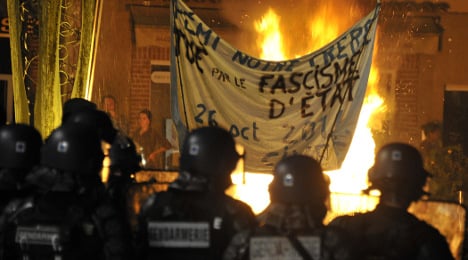 A fire burns as anti-riot gendarmes clash with opponents of the Sivens dam project during a protest on October 26th in memory of the 21-year-old man who was discovered dead on the site of the dam. Pho

Remi Fraisse was killed in the early hours of Sunday as people protesting against a controversial dam project in the southwestern Tarn region clashed violently with security forces — the first such death in mainland France in nearly three decades.

The cause of his death is not yet known but autopsy results indicated Monday he had been the victim of an explosion.

Analyses are now being carried out on skin samples, bits of Fraisse's rucksack and debris on the Sivens site to determine whether a stun grenade thrown by police or a Molotov cocktail lobbed by protesters killed him.

Promising to unveil "the truth" about what happened to the 21-year-old, Francois Hollande also called for "calm and understanding" as anger spread to other parts of the country, including the western city of Nantes where as many as 200 protesters went on a rampage Monday evening.

Authorities were also warily eyeing a separate eco-protest in the northern city of Amiens, where hundreds of people from all over the country were due to converge in support of activists being tried for vandalising the site of a much-decried industrial super-farm.

Until now, politicians had come under fire for a perceived slow response to the death.

Arie Alimi, the lawyer for Fraisse's family, told French radio he suspected police were responsible for his death.

"What I know is that there are no burns (on the victim's body). A Molotov cocktail causes burns," he said.

Jose Bove — a Green MEP and activist who was present at Saturday's protest that started peacefully but later spiralled out of control — said witness statements pointed to police responsibility.

He accused authorities of having "deliberately" resorted to the use of riot police in an empty area where there was no property or machinery to protect, "purely to create tension".

The victim's family have announced they will make two official complaints — one for murder and the other for "violence that caused death without the intention to kill".

But prosecutor Claude Derens, who is handling the case, defended police whom he said were being mobbed by a hard-core group of protesters at the time of Fraisse's death at around two in the morning Sunday.

They were "in front of an extremely big and violent group" that included the victim, he told RTL radio.

The incident is the culmination of weeks of protests by those opposed to a dam they say will destroy a reservoir of biodiversity and will only benefit a small number of farmers.

Those promoting the project, including local politicians, retort that the dam is in the public interest as it will ensure irrigation and the development of high-value crops.

The last person to die in a protest in mainland France was Malik Oussekine, who was the victim of police brutality in December 1986.

Another man was killed in October 2011 during clashes with security forces in the French overseas region of Mayotte.