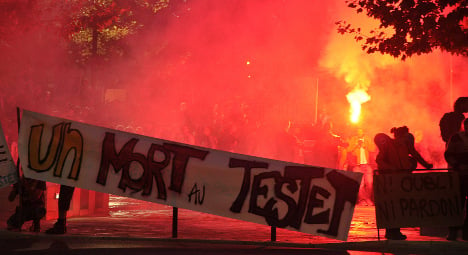 Opponents of the Sivens dam project protest in Gaillac in memory of the 21-year-old man who was discovered dead on the site of the dam. Photo: Pascal Pavani/AFP

The French prosecutor probing the death of an eco-protester in clashes with security forces said Tuesday that traces of TNT used in police grenades were found on the victim's clothes.

"We cannot today exclude the role of a concussion grenade thrown from the enclosure where gendarmes had entrenched themselves overnight Saturday," Claude Derens told reporters, referring to the military forces that are
charged with police duties.

Remi Fraisse, 21, died early Sunday during fighting between police and protesters that also left seven security forces injured, hours after some 2,000 people gathered peacefully against the controversial Sivens dam project in the southwestern region of Tarn.

"The big wound on the top of Remi Fraisse's back was caused, in all likelihood, by an explosion," Derens told reporters.

But further analyses were necessary to determine whether "a grenade, thrown from the area where police were entrenched" was "at the origin" of this explosion, he said, referring to media reports that a grenade may have hit the protester.

Fraisse's body was discovered at two in the morning Sunday, when a hard-core group of around 100 protesters were still clashing with police, throwing Molotov cocktails and stones as security forces posted behind a fenced-off enclosure responded with tear gas and stun grenades.

Police shone a light on the area and noticed the body, leaving the zone where they were entrenched to give him first aid, to no avail.

The tragedy is the culmination of weeks of protests by those opposed to a dam they say will destroy a reservoir of biodiversity and will only benefit a small number of farmers.

Those promoting the project, including local politicians, retort that the dam is in the public interest as it will ensure irrigation and the development of high-value crops.

On Monday, hundreds of protesters gathered in front of the prefecture in Albi, not far from the dam project, shouting "Remi, Remi, we won't forget you", and protests took place in several other parts of France.

Police were meanwhile combing the site where Fraisse died, a bloodstain still visible where he fell.

His father Jean-Pierre Fraisse told iTele that his son had gone to the protest on Saturday "like a tourist, with his girlfriend".

"There had been a very peaceful demonstration in the afternoon, and then he stayed on in the evening. And he got carried away," he said, adding that his son was not one of the radical protesters.

Fraisse's family have decided to make an official complaint for murder "by one or several people vested with public authority" in order to find out the exact causes of the death, lawyer Arie Alimi said.