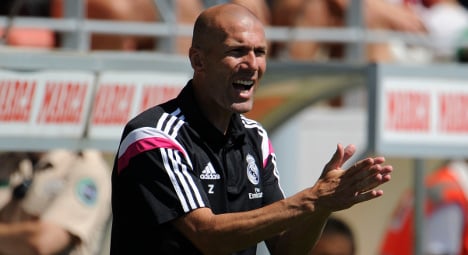 Spanish sports daily Marca reported that the 1998 World Cup hero had picked up a three-month suspension.

Zidane — who had been linked with the head coach role at Ligue 1 side Bordeaux in the close season — has fallen foul of the Spanish Football Federation for taking charge of Real's reserve side Castilla without the necessary qualifications.

Real issued a statement declaring their "absolute disagreement" with the decision.

They pointed out that Zidane "has been authorized by the French Football Federation to work as a head coach in the category Real Madrid Castilla currently find themselves in".

The statement concluded: "Real Madrid will pursue every available legal avenue so that this decision is overturned."

Zidane was elevated to reserve team coach at the beginning of this season following a single campaign as Carlo Ancelotti's assistant which saw Real win a tenth European Cup in May.

Spanish coaching school, the Cenafe, has submitted a complaint to the Spanish Federation against Real, claiming they are using assistant Sanchez's name on the teamsheet to bypass the regulations.

The case has sparked controversy in Spain with national team coach Vicente del Bosque telling Cope radio station that "everyone should have a coaching badge".

However, both Ancelotti and Dutch football legend Johan Cruyff have spoken out in support of Zidane.