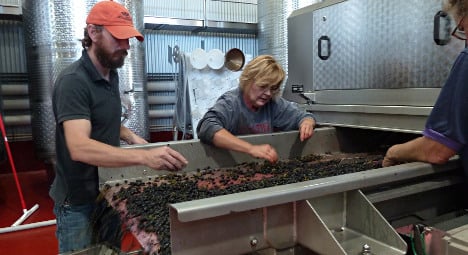 The 40-year-old Finot grew up in the Crozes-Hermitage wine region in south-eastern France on the banks of the Rhone River before traveling here, to the foot of the Appalachian Mountains.

"We all came here a little bit by chance," said Finot, who works at the vast King Family Vineyards, which sprawls across 30 acres (12 hectares) in the town of Crozet.

"I don't think any one of us had intended to stay over the long term."

The King vineyards are not far from Jefferson's home Monticello.

The third US president — and accomplished botanist — struggled in vain to overcome the heat, humidity and pests that attacked the European grape varieties he planted.

Today, seven of the 30-some wineries around the region's big city of Charlottesville are managed by Frenchmen.

Finot says he came to the area to "make Virginian wine with a bit of French flair."

With his French wine-growing certificate in hand, Finot traveled extensively in South Africa, New Zealand and California before moving to Virginia, where he met his wife and started his family.

"There is a way to make quality wines here. It's a very small business. We all work together," he said.

At a nearby vineyard, Benoit Pineau said he also first came to Virginia with plans to work there "just for a season."

Pineau, 33, has now been at Pollak Vineyards for three years, after stints in Australia, Canada and Chile.

"It's easier to be here than in France," said Pineau, who hails from the central French city of Tours.

That is a far cry from the strict guidelines followed in France.

In the United States, "everything is guided by the laws of the market.

There are no government subsidies," said Finot.

But make no mistake, the wine is Virginian.

"We are trying to develop a style that is a better match for what grows here, with a 'French touch' in the way the grape is handled," said Finot.

Virginian wine, which barely existed 40 years ago, is now experiencing a boom of sorts, with consumers in the greater Washington area keen to "eat local".

In the past 20 years, the number of wine businesses has increased fivefold. There are now about 230 wine producers in the region, many of them family-run businesses with cellars open to visitors and weekend tastings that draw loads of tourists on weekends.

"Wine appreciation is spreading. We are still teenagers in the wine world," said Carrington King, whose family — originally from Texas — has invested in the region.

"There is a real movement going on in Virginia (but) it takes time — it's not always overnight. Every year, we get better and better. We improve and learn from our mistakes."

The United States this year became the biggest domestic market wine market in terms of volume of sales, according to the Paris-based International Organization of Vine and Wine.

"But being French and in the wine business is something in demand, just as it is for bakers and chefs. We have a reputation that allows us to travel. We are lucky."