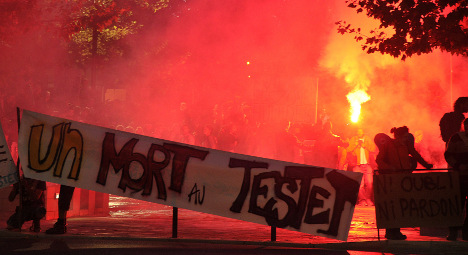 Opponents of the Sivens dam project protest in Gaillac in memory of the 21-year-old man who was discovered dead on the site of the dam. Photo: Pascal Pavani/AFP

The general prosecutor of the town of Albi, Claude Derens, told a news conference it was "impossible" to determine the cause of death of the 21-year-old activist during the unrest, which also left seven security personnel injured.

Some 2,000 people had gathered to protest the controversial Sivens dam project in the Tarn region, which they say will benefit only a handful of agri-businesses.

"We are not saying that the security forces killed a protester, but a witness told us the death happened at the time of the clashes," Ben Lefetey, a spokesman for the organizers, told AFP.

Lieutenant Colonel Sylvain Renier of the Tarn police said between 100 and 150 "anarchists" wearing hoods threw incendiary devices at the security forces at around 2:00 am.

Protests and clashes have intensified at the site since the start of clearing work early last month.