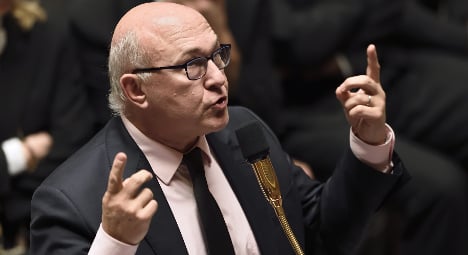 Finance Minister Michel Sapin announced there were certain pieces of "good news", notably a reduction in interest rates that brought down the cost of financing the country's debt, that had allowed France to trim its deficit.

Paris has said that next year's deficit — the shortfall between revenue and spending — will hit 4.3 percent of annual economic output, far above the EU's 3.0 percent ceiling, and as a result Brussels could potentially demand changes to the budget.

EU Economic Affairs Commissioner Jyrki Katainen has written to Paris to demand explanations for the overshoot, according to a letter confirmed by French President Francois Hollande on Friday.

France shocked its European partners in September by going back on a pledge to get its deficit to below the three percent ceiling by next year.

Instead, it pushed back this target to 2017 — the year of the next French presidential election — putting the eurozone's second-largest economy on a collision course with Brussels.

"I think that France here is offering clarifications and elements that should allow us to stay on course" with the EU rules, Sapin told reporters.

He stressed that "the main budgetary rule for France is to achieve next year a reduction of at least 0.5 percentage points of gross domestic product in our structural deficit," he added.

The structural deficit is the core deficit of a country when the ups and downs of the economic cycle have been stripped away.