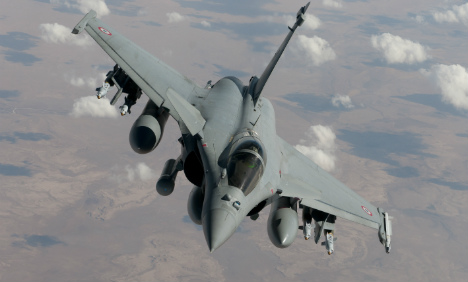 The 12 air strikes in Iraq and six raids near the contested Syrian town of Kobane were confirmed by the US Central Command, which is overseeing the air war against the jihadists,

US-led warplanes — including fighter jets and drones — carried out three air raids southeast and west of the Mosul Dam in the north, destroying two vehicles and a mortar position, Central Command said in a statement.

Three strikes south of the Baiji oil refinery struck two small units and destroyed a vehicle, and two strikes near Baiji targeted an IS training camp, it said.

US military officials say Iraqi government forces are trying to roll back IS militants on the main route leading out of Baghdad north to Baiji but have been slowed in part by numerous roadside bombs planted by the militants.

Referring to the overnight bombing, France said the air raids were a "success."

"I think it's safe to say we hurt them last night. The operation is a success," France's Chief of the Defense Staff Pierre de Villiers told Europe 1 radio.

French Rafale fighter jets took part in the operation, which destroyed buildings in which IS militants "produced their traps, their bombs, their weapons to attack Iraqi forces," he said.

In Syria, US bomber planes renewed air raids on IS jihadists near the border town of Kobane, with six strikes targeting the militants.

US defense officials told reporters on Thursday that an IS offensive had stalled around Kobane, and that Kurdish defenders — backed by a flurry of air strikes — were no longer on the brink of defeat.

Overall, US and allied aircraft have flown nearly 6,600 sorties in Iraq and Syria and dropped more than 1,700 bombs since the air war began in August, Central Command said Thursday.

The air strikes have helped Kurdish militia defending the embattled Syrian border town of Kobane to hold out against the more heavily armed jihadists but have not stopped IS making new gains in parts of Iraq.