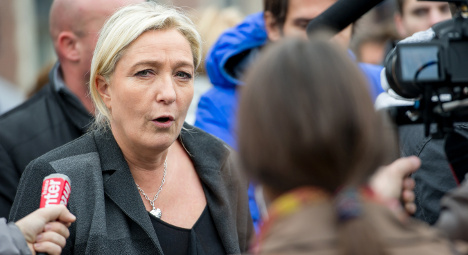 Front National president Marine Le Pen speaks to the press during a visit in the city of Calais, northern France. Photo: Philippe Huguen/AFP

For months the port city, where around 2,500 migrants are camped out in dire conditions, has been struggling to cope with a tide of migrants, each of whom are desperate to try to get onto trucks and cross the Channel to Britain.

Authorities have been under pressure to deal with the crisis, which worsened this week as migrants fought pitched street battles between other other.

With tensions high and anti-immigration sentiment in the city growing, the far-right National Front leader Marine Le Pen chose to visit the city on Friday.

Le Pen blasted the government's handling of the crisis.

“We need to regain control of our borders and remove all possibility of allowing illegal immigrants to stay. We must wage war on this phenomenon,” Le Pen was quoted as saying by Le Figaro.

“Migrants belong in the country where they come from. Of course, we can be sensitive to the plight of migrants, but first I see the plight of people from Calais.” Le Pen’s visit comes the day after France’s Interior Minister Bernard Cazeneuve announced that 100 extra police officers had been dispatched at the port, bringing the total to 450.

However Le Pen slammed Cazeneuve’s approach as “soft”, saying that the extra police were not sufficient to handle the crisis.

Needless to say, Le Pen’s presence was not welcomed by the city’s mayor Natacha Bouchart, from the centre-right UMP party, who described her visit as “uncalled for”.