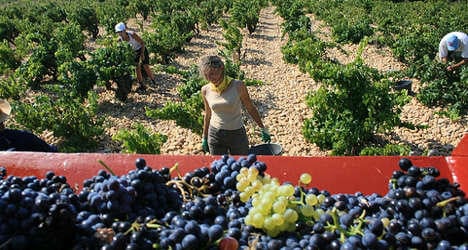 France is poised to reclaim the crown as the world's biggest wine producer, according to forecasts published on Thursday by the International Organisation of Vine and Wine.

With 2014's production forecasted to reach more than 46 million hectolitres, the home of the Burgundy, Bordeaux and Chardonnay would beat both Italy and Spain to the throne.

Italy is expected to produce just 44.2 million hectolitres this year, down sharply from the 52.4 million last year due to an unusually wet and cold summer.

Spain's output is expected to reach 37 million hectolitres this year compared to 45.6 million in 2013.

New World wine production meanwhile is expected to hold steady in the United States, reaching 22 million hectolitres while Chile is due to produce 10 million.

New Zealand is heading for its new record with 3 million hectolitres, said the organisation.

"After two years of excessively low harvests, we're getting somewhat back to normal … we see good prospects at the start of this harvest," said Jerome Despey, head of FranceAgriMer's wine division.

Production is due to be up in the Champagne region but down in Languedoc-Roussillon, an area that was blighted by drought in spring, then hail.

France suffered two exceptionally poor harvests in 2013 and 2012, which saw record-low production due to cool temperatures and excessive rains.