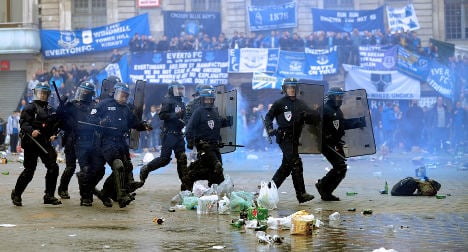 Riot police charge across the Grand Place in Lille on Thursday ahead of Everton's Europa League match in the city. Photo: AFP

There were clashes between English football supporters and French riot police in the centre of the northern French city of Lille on Thursday ahead of the Europa League clash between Lille and Everton.

Images and videos show police charging across the Grand-Place square in the centre of Lille towards groups of fans, around 5,500 of who are expected in the French city for the game.

Riot police also fired tear gas to disperse fans and there were reports that police fired rubber bullets at supporters, with one fan hit in the head.

While most Everton supporters are pictured drinking peacefully in the square, several can be seen pelting riot police with beer bottles.

According to the regional Voix du Nord newspaper the trouble flared at around 2.15pm when undercover police tried to arrest a known hooligan, spotted by British police.

French officials said the trouble started when a British police officer spotted one Everton fan who is a known hooligan and another man with a record for dealing drugs.

French police wanted to arrest the two but were threatened by English supporters and took refuge in a book store. Riot police then fired tear gas and some English fans hurled beer cans and other projectiles.

The atmosphere calmed when police withdrew.

The response drew criticism from supporters on Twitter, most of whom say French police wildly overreacted.

The police were also criticized by French Twitter users with one asking how will France be able to host the Euro2016 football tournament when they can't deal with "6,000 English fans who travelled peacefully".

After the trouble broke out, most shops in the centre of the city pulled down their shutters as did several bars and brasseries.

Local authorities had issued a decree on Thursday which banned the drinking of alcohol in public places, but it doesn’t seem to have had the desired effect.

On Wednesday night a group of local Lille hooligans staged an unprovoked attack on Everton fans as they drank in two pubs in the city centre, leaving two fans injured. A doorman at one of the bars told the Liverpool Echo: “The Lille hooligans just appeared from the Place Louise de Bettignies across the road, from a side street, and just ran at the pub. There were some Everton fans outside smoking and they got caught cold. The hooligans picked up chairs we had stacked up outside and attacked them while others used them to smash windows and try to get inside.

“I saw one older English guy being punched by about three Lille hooligans. His face was bleeding badly. I am so sorry for what happened.”