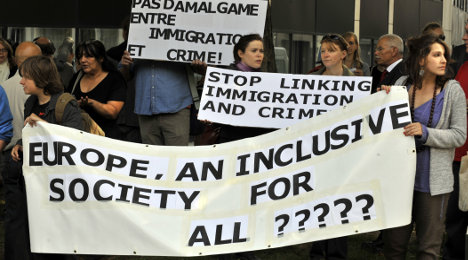 People demonstrate against the French government's immigration policy, especially their deportation of the Roma minority from France in 2010. Photo: Georges Gobet/AFP

The bill is currently being rushed through the parliamentary process to give France new powers to combat a perceived increase in the threat from terrorism.

But an article was added to the bill in the Senate this week is greatly concerning human rights groups and immigrants' support organisations in the country.

The clause would give France the power to refuse entry to “undesirable” nationals of EU states and their families if they posed a threat to public order or safety.

In full it reads: “Any national of an EU member-state … or any member of the family of an individual will be banned from entering the French territory if their presence causes a serious threat to a fundamental interest of society, in terms of public order or security, because of their personal behaviour.”

It comes at a time when countries like the UK are talking of imposing a cap on EU migrants and talk in France of a need to restore its borders with European neighbours.

Critics say the wording of the clause is so vague it could be used to prevent EU migrants from entering France, notably those from Eastern Europe.

Opinion: 'Let's not go back to work permits: Keep Europe's right to move'

Human Rights specialist and lecturer in law at Paris Nanterre University Simon Slama told The Local that the French government has simply taken advantage of the increased fear around terrorism to increase its control over its frontier.

“This is certainly not designed to fight against terrorism, it is simply to stop people they consider as undesirable from entering France freely,” he said.

Slama questions France’s motives by pointing out that EU law already allows member states to restrict free-movement of EU citizens on grounds of security or order.

Claudia Charles from the French immigrants support group, GISTI, told The Local the powers are simply a way for French authorities to prevent members of the Roma community from being able to enter the country.

“The purpose of this law has been completely twisted,” Charles said. “It's simply to allow French authorities to remove so-called “undesirables”, not because they are terrorists but because they are poor, notably the Roma."

She says a similarly worded article has been included in an immigration bill, but the anti-terror legislation gives the government the best chance of getting it passed into law. (Police in France dismantle a camp where Roma migrants had made their home. Photo AFP)

Charles points to an example of a Roma woman who was recently deported because she was caught trying to trick money out of people in a charity fundraising scam.

“Under this so-called ‘anti-terrorism’ bill French authorities will therefore be able to prevent this lady from coming back, because she was not a resident in France and was considered a threat to public safety,” she said.

“But she is far, very far, from a being a terrorist or someone who threatens society.”

Members of the Roma community are regularly subject to mass deportation in France, with authorities bulldozing makeshift camps before putting them on planes in the direction of Romania and Bulgaria, where most come from originally.

Up until now those same Roma people have been able to return of their own will thanks to the fundamental law of the EU that allows nationals of member states to move freely within the border of the 28 nation bloc.

However with this new anti-terrorism bill, that will no longer be the case.

The bill represents a complete “shift” of France away from this fundamental EU right, Charles argues and “European Commission – the guardian of the treaties and enforcer of EU law has not reacted.”

France’s Interior Ministry reacted to the criticism by insisting the measure will be judged on a case by case basis for individuals who "endanger the fundamental interests of the nation, not those who engage in begging”.

However recently EU leaders in Brussels have made it perfectly clear what they think of any attempt to prevent freedom of movement of European citizens.

Speaking in the UK recently, outgoing European Commission president Manuel Barroso said any attempt to impose caps on migrants would never be accepted by the EU.

The anti-terrorism bill comes as France is on increased alert for potential attacks.

With hundreds of French nationals fighting a jihad in Syria and Iraq, the French government fears they may return home to plan attacks on French soil.

Security has been increased at transport hubs, tourist attractions like the Eiffel Tower and shopping centres.