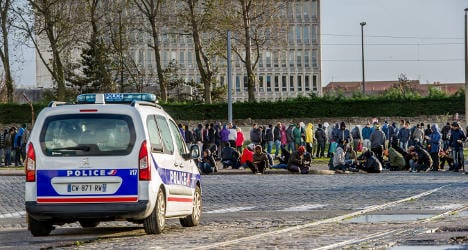 More police are headed to Calais to contain the growing migrant crisis there. Photo: Philippe Huguen/AFP

France's interior minister said on Thursday he had dispatched 100 extra police to the port of Calais –bring the total to 450 — where an influx of illegal migrants trying to get to Britain is causing more and more havoc.

The town has been struggling for months to cope with a tide of migrants trying to slip onto trucks and cross the Channel to Britain, despite a slew of recent measures to tighten security.

And this week, violent fights between migrants in an industrial district where many have taken refuge, saw police fire tear gas and seal off the area to try and restore calm.

The migrants — many of whom are from Eritrea and Sudan but also from Syria and other conflict zones — have several times mobbed a zone in the port where trucks wait to be checked before they board ferries.

They are desperate to scramble onto the vehicles to make their way illegally to Britain, which some see as a place where migrants have more opportunity.

In an interview with local daily La Voix du Nord, France's Interior Minister Bernard Cazeneuve said he had decided to send reinforcements to Calais by dispatching "100 additional police officers, of whom 70 will secure the port permanently 24 hours a day, and 30 others will secure the town centre."

This brings the total number of police mobilized to keep order in the port to 450, he added in the interview published Thursday.

"The aim is for trucks to be able to move more freely, to avoid them being mobbed, and to strengthen controls while also ensuring the security of migrants who are themselves in danger," Cazeneuve said.

On Monday night, a 16-year-old Ethiopian girl was killed after being hit by a car while crossing a motorway in the area, police said, highlighting the dangers involved.

The problem in Calais is not new — illegal camps of migrants have sprung up in the area since French authorities closed down the infamous Sangatte immigrant detention centre in 2002.

But the crisis has spiralled, prompting the city's mayor Natacha Bouchart to threaten last month to shut down the port entirely in protest at London's perceived lack of action or help over the problem.

Cazeneuve has said that Britain had since agreed to contribute up to €15 million (£12 million, $19 million) to help deal with the problem.