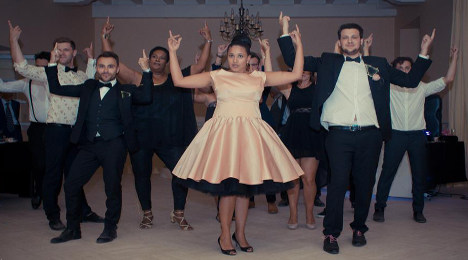 If you choose to live your life abroad, when you turn 30, you might find yourself constantly accepting (or declining) a number of wedding invites from all over the world. As of this late October 2014, I have attended four weddings this year. The locations range wildly from my hometown of San Antonio, Texas, to whimsical Corfu Town in Greece, and finally two weddings in France, Lille & Bordeaux.

While all of the weddings were memorable, stunning affairs, I have to admit that the French seem to have figured out the perfect formula for a successful wedding. They could definitely teach us a thing or two about leaving drama at the door and partying until dawn, in style – with lots of booze.

Here's five reasons why if you get invited to a French wedding you just have to go.

It’s not that I’m against bridesmaids as a whole, I just don’t like the idea of filtering friends and requiring them to do so much work (and spend a lot of money while doing so) for what is essentially your wedding.

The idea I’m sure started off innocently enough, but in 2014 it has become a bid for who’s the real "best" friend, with awkward dress choices, enough drama to make even a soap star cringe and just general semi-slavery.

In France they have witnesses, it’s pretty casual, and in the recent wedding I went to in Bordeaux, she had "bridesmen" – a fun take on your traditional wedding party.

2.  Being ‘Cheesy’ Never Felt So Good

While in the USA wedding food is basically of the "chicken or fish" variety, in Italy the weddings I have been to pile food into their guests' stomachs as if they were trying to make foie gras using humans.

The buffet before dinner is enough to last you until next week but then a long sit-down dinner with multiple courses awaits you. Inside your head, you are imagining how you can get out of eating so much food without offending your hosts.

The French, as usual, have got this one bang on. Both weddings I attended had the perfect amount of appetizers and main course with plenty of bubbly to go round, while leaving the best until last – the cheese and dessert.

One wedding I attended had an entire room dedicated to sweets, a cheese corner offering up anything you wanted and a macaroon stand. The other had a "candy bar" with plastic take-away bags that you normally spot in a candy shop so guests could have a "sweet" ending to the night.

Possibly one of my favourite French traditions is that of the newlyweds making their guests – every single one – a personalized gift to take home.

In Italy, it’s usually store-bought hard candy that could break your teeth but in France it’s up to the couple. In Lille, the couple gave everyone tiny glasses of various high-quality salts that they had put together themselves with tiny hand-written cards. It was not only a special touch but that salt tasted damn good on my steak tartare six months later in Italy. The gift that keeps on giving!

Without a doubt, the most fun I’ve had on the dance floor has been at French weddings.

The New York Magazine ‘The Cut’  estimates that American and French wedding budgets work out to be roughly the same — except the French ones “have better food and last longer”.

In Italy, dancing is only optional and not all that common (in my experience). At weddings I've been to in the US, I've boogied up to around midnight or 1am.

But at both weddings I've been to in France, I was the first one to leave. At French weddings the guests are still shaking their tails until about 4 or 5am, and that means every woman, uncle, child and grandma. It's insane but so much fun at the same time. As you can expect, drinks are flowing quite copiously, but surprisingly no one gets trashed. Some people might think giving a cash gift is tacky but I don’t really understand why. Instead I don’t really want people to see that I chose the lower-priced – yet still outrageously expensive – tea-towels because they were the only item on the gift registry under €100.

In France (and Italy) it is very common to give the couple cash, which normally goes to the honeymoon fund.

Most people live with each other before they get hitched so they really don’t need a fourth fondue set collecting dust in their basement. Money, however, is still pretty damn valuable.

In Bordeaux, guests were asked to leave the couple suggestions on what they should do with the money on their honeymoon. Either "dinner for two in Thailand" or "A spa visit in the wilds of Iceland".

Georgette Jupe is the writer behind the blog "Girl in Florence”

The article is an extension of her post ‘Why I will Never Say No To a French Wedding.

Are you a writer? Do you know a thing or two about France? Send suggestions for guest blogs to [email protected]