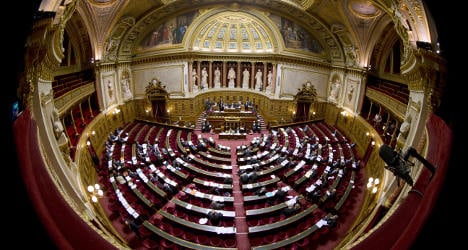 French lawmakers could be in big trouble with the taxman. Photo: AFP

A new transparency requirement for French politicians has yielded what may be a serious tax scandal for elected leaders in France.

France’s roughly 920 deputies and senators dutifully filled out disclosures of their wealth that were, for the first time ever, made public in July, but some among them were less forthcoming with the taxman.

France’s tax authority, known as ‘le fisc’, took notice of the discrepancy and is now seeking an explanation of the differences from some 60 lawmakers, French satirical paper Le Canard Enchainé revealed. For the moment no deputies have been named.

“Many of them minimized their wealth, by negligence or with intent, but without exceeding 5-10 percent of their real worth. However, there are some who have tried to intentionally deceive the government,” the paper wrote.

It’s not yet clear whether this will be the start of a massive scandal involving dozens of lawmakers who were dodging their taxes.

If so, it would dwarf the case of disgraced former budget minister Jerôme Cahuzac, whose job it was to crackdown on tax cheats, but himself had an undeclared Swiss bank account holding some €600,000.

“A final list of fraudsters is due out by the end of the year,” but presently the number of true cheats is expected to be relatively small, the Canard reported.

After Cahuzac’s spectacular fall, President François Hollande tried to restore the public’s trust in his ministers by forcing them to make their finances and assets public in April 2013.

A similar rule came into effect for members of the French parliament in July 2014, when their assets were for the first time ever made public.

The transparency requirements have turned up some interesting reading on who was the wealthiest – a taboo subject in France – but also some iffy tax practices.

For an already weakened Hollande’s government, hobbled by rock bottom levels of popularity and record unemployment, there came another tax scandal this summer related to the disclosure requirements.

In September Trade Minister Thomas Thévenoud resigned just nine days – nearly a record – after being appointed due to unspecified “tax problems.” It turned out he had neither filed nor paid his income taxes in years.

Subsequent media reports revealed Thévenoud had all manner of outstanding bills that had turned into legal actions against him. One of the most stunning examples was Thévenoud's upaid rent, which he had been not paid for three years.

He explained the lapse in payments by saying he had an “administrative phobia" that put him off such tasks.