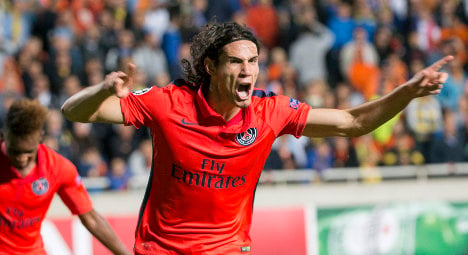 The Uruguayan marksman claimed his second goal in PSG's Champions League Group F campaign and his sixth of the season when he latched onto a loose ball in the box and, despite falling to the ground, was able to hook it home with his right boot for a victory that rarely looked on the cards.

"It's always good for a striker to score goals and the important thing was to get the victory which is another step forward towards qualification," said Cavani, who was sent off last Friday for two controversial yellow cards after celebrating a goal in the 3-1 league win over Lens.

APOEL will consider themselves unlucky not to have claimed at least a draw and should have taken the lead on several occasions in a match that slipped from their grasp and puts their qualification chances in jeopardy.

PSG remain top of the section with seven points, a point clear of Barcelona, who beat Ajax 3-1 at the Camp Nou on Tuesday, while APOEL prop up the group with just one point.

PSG midfielder Blaise Matuidi was equally delighted with the win after a hard nights work that finally reaped success at the death.

"They (APOEL) played well and had some good chances," said the French international.

"The three points is good for the team and the important thing now is to keep going and continue to pick up victories," he added.

The Cypriot champions, who became the first team from the island to reach the quarter-finals of Europe's biggest club competition in 2012, outworked and outmuscled their more illustrious visitors in a tight game of few chances.

On a night when PSG coach Laurent Blanc was able to field his captain Thiago Silva in the centre of defence after nine weeks on the sidelines, it was Silva's Brazilian compatriot David Luiz who cleared off the line twice in a second half largely controlled by APOEL.

The closest the match came to a goal until Cavani's strike was in the 56th minute when a glancing header from Tiago Gomes beat PSG 'keeper Salvatore Sirugu but was miraculously headed off the line by David Luiz.

Minutes later the former Chelsea player scrambled the ball clear when Sirigu was again left wanting and at full-time Blanc could feel very lucky to be returning to the French capital with three points.

Twenty-one first-half goals flew in during the opening 45 minutes of the other seven matches taking place on Tuesday but there was no threat of a breakthrough in the Cypriot capital as the game proved a slow burner.

The best first-half chance fell to APOEL's lanky Irish centre-forward Cillian Sheridan in just the second minute, as he clipped a volley towards the bottom corner only to be stopped by the reflexes of Sirigu who dived to his right and tipped the ball behind.

PSG looked the more polished side on the ball and dominated possession but the hosts set up a resilient defensive wall that the visitors failed to breach.

Marshalled by Brazilian veteran Carlao, who spent six seasons in Ligue 1 with Sochaux, APOEL dealt comfortably with Cavani while Javier Pastore and Lucas on the flanks were also stifled.

After the break, APOEL, whose 1-0 loss at Barcelona last month was their only defeat this season coming into this game, went on the attack and took the game to PSG before Cavani popped up with three minutes left to snatch the points.