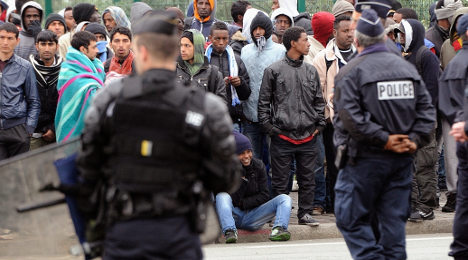 The migrant crisis in Calais is becoming increasingly violent and disruptive. Photo: AFP

Police in Calais said on Tuesday they sealed off an industrial district of the French port city after a fight between illegal migrants, in the latest incident to hit the northern gateway
to Britain.

The port has for months been struggling to stem a tide of migrants trying to slip onto trucks and cross the Channel to Britain, despite a slew of recent measures to tighten security.

In the latest incident on Tuesday, police closed off an industrial area of the city where migrants from Ethiopia and Eritrea were battling each other with sticks, after firing tear gas to try and break up the fight.

The district in the Dunes industrial zone has recently become a refuge for migrants pouring into the port city, and unrest flared up Monday evening and continued into Tuesday.

One migrant was detained and dozens were slightly injured during the night, police said.

Calais authorities and police have warned recently that the crisis was becoming increasingly violent.

"They are becoming more violent and aggressive and we have to use tear gas more and more," said a police officer last month, speaking on condition of anonymity.

The daily struggle of migrants to get to Britain Adding to the general unrest, a 16-year-old Ethiopian girl was killed overnight on Monday after being hit by a car while crossing a motorway in the area, police added.

On Monday, security forces had already fired tear gas at hundreds of migrants trying to force their way onto trucks waiting to be checked before they boarded ferries bound for Britain.

The problem in Calais is not new – illegal camps of migrants have sprung up in the area since French authorities closed down the infamous Sangatte immigrant detention centre in 2002.

But the crisis has spiralled, prompting the city's mayor Natacha Bouchart to threaten last month to shut down the port entirely in protest at London's perceived lack of action or help over the problem.

French Interior Minister Bernard Cazeneuve has said that Britain had since agreed to contribute up to €15 million (£12 million, $19 million) to a fund to help deal with the problem.

Speaking this week Britain's ambassador to France Sir Peter Ricketts sdefended the UK's efforts at helping France stem the flow of migrants, but said the key was to explain to the thousands camped out in Calais that the UK "was not EL Dorado".

Migrants in Calais mainly come from Sudan or Eritrea but also from Syria and other conflict zones, desperate for an opportunity to get to Britain which they see as having a favourable asylum policy, or where they already have family.

French authorities have arrested at least 7,500 illegal immigrants trying to cross the Channel this year.