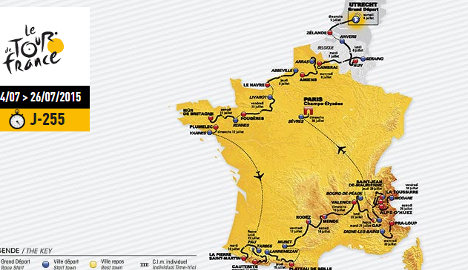 This is one of two stages where the weather could play a crucial and decisive role in determining the outcome not just of the stage but the whole Tour. Along with the sixth stage from Abbeville to Le Havre, in which there will be 100km of course along the cliffs of Normandy, this stage, which takes in the Zeeland Delta in the Netherlands, is at severe risk of high winds. High winds create the possibility for splits in the peloton that can quickly grow into gaps that count minutes rather than seconds. The favourites will be on high alert. Stage 4: Seraing to Cambrai, 221km

Tour director Christian Prudhomme likes early stages that animate the course rather than simply ending in a bunch sprint, and this is one such. Back in July we saw what cobbles can do on a stage as Vincenzo Nibali laid down a dominant marker, taking more than two minutes out of all his major overall rivals after a brilliant ride on the cobbles. Reigning champion Chris Froome crashed out and abandoned the race even before attempting the cobbles while Alberto Contador looked uncomfortable and lost more than 2min 40sec. This will be a stage in which a fair few contenders will likely be hoping to stick to Nibali's rear wheel.

The first day in the Pyrenees will be crucial, not least because of the final 15.3km climb with an average gradient of 7.4 percent. It is not the hardest climb, nor the toughest stage of the race, but two factors will make it perhaps the most testing mountain stage. It comes after a rest day and it is the first mountaintop finish. Those two factors can catch out riders whose bodies have yet to adapt to the specific exertions of the high mountains, as was the case with Australian Richie Porte this year, who had looked strong on milder climbs in the Vosges region before cracking spectacularly on the first true mountain stage. Stage 17: Digne les Bains to Pra-Loup, 161km

This is not the toughest mountain stage by far in terms of the climbing, nor the relatively short distance, but it is the long descent of the penultimate Col d'Allos ahead of the short final ascent to Pra-Loup that makes it intriguing. This year Contador's hopes went up in smoke when he crashed on a fast descent and broke his leg, forcing him out of the Tour on the 10th stage. Nibali is regarded by many as one of the best descenders in the peloton and this tough technical descent could allow him, or someone else, to get away and defend a considerable gap ahead of the final climb. With most minds focussed on the climbs, those who dare to attack where it's not expected can sometimes see themselves richly rewarded. This stage, the penultimate one of the Tour, is tailor-made for fireworks. It is very short for a mountain stage at just 110km and includes three brutal climbs, meaning it will be a battle between the contenders right from the off. The Col du Telegraphe is 11.9km long at an average gradient of 7.1 percent, followed by the ceiling of next year's race, the Col du Galibier — 17.7km at 6.9 percent. None of the contenders will likely have broken clear by then, although some may have fallen away, but the tough climbing already in their legs might come back to haunt the overall challengers when they then ascend Alpe d'Huez, all the way to the finish. Its 21 hairpins and 13.8km at 8.1 percent will ensure the possibility of turning the Tour on its head remains right to the very end.