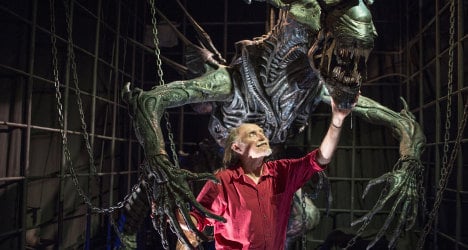 The "Queen Alien" from US movie series is shown with the Frenchman who rescued her from ruin. Photo: Philippe Merle/AFP

For anyone ever terrified by the American movie series "Alien," it must seem impossible to believe the cold black heart of that terrifying film could ever be left to harmlessly decompose in a nameless warehouse.

But that was exactly what happened to the alien queen with her HR Geiger-designed row of evil teeth and merciless claws. The roughly three-metre and 500 kilo monster had been left in storage, forgotten for a decade in Los Angeles.

That is until French miniature maker Dan Ohlmann bought her for €31,000 from Amalgamated Dynamics Inc. about a year ago and brought her to Lyon in south east France for a little tender loving care.

Because the once terrifying creature had sat neglected and discarded there was much to do. The intricate gears and mechanisms that made her move for the cameras had to be repaired and the latex used to make her skin needed to be protected.

“When she arrived a year ago it was disgusting. She was slimey, not because it's an alien though,” Ohlmann told French daily Le Monde. “But because latex has a 10-year life span and it had melted.”

With a team of experts and volunteers he rehabbed the creature, including the painstaking process of thousands of injections of silicon, a sort of Alien botox. In all, the rehab efforts would cost €120,000.

And last month the creature was unveiled to the public at its new home in the Musée Miniature et Cinema (The Museum of Miniatures and Cinema), which was founded by Ohlmann. It’s already drawing quite a crowd.

The most numerous and reverent visitors are the devotees of the film series’ star.

“I’ve discovered there’s a community, almost a religion around the “Alien Queen”. They have long hair, in the style of Black Sabbath and Celtic symbols or tatoos in her honour,” Ohlmann told Le Monde.

He added: “There is a whole mystique around it. Sometimes I wonder if one day I’m going to walk into the room (where she is) and find candles burning.”