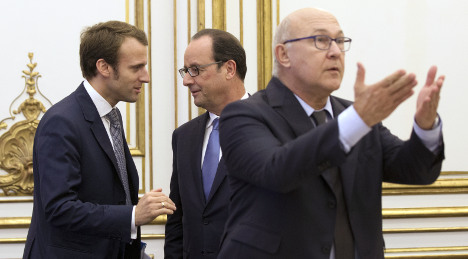 French and German ministers met in Berlin on Monday, amid calls on Germany to do more to boost growth in Europe, while France faces a battle in Brussels over its budget.

The meeting comes at a crucial time for Paris, which is at loggerheads with Brussels over its 2015 budget as it is likely to overshoot targets once again.

French economy and ministers Emmanuel Macron and Michel Sapin were welcomed by their German counterparts Sigmar Gabriel and Wolfgang Schaeuble for a mini-summit in preparation for a wider EU gathering at the end of the week.

The four ministers were scheduled to hold a joint press conference later.

According to a report in the weekly Der Spiegel, Germany is helping France to draw up a pact with the European Commission on deficit reduction and structural reforms to win Brussels' approval of the 2015 budget plans.

Ahead of the mini-summit, Sapin and Macron called on Germany to increase investment by €50 billion ($64 billion) in the next three years to match the amount Paris is seeking to save from public spending.

"Fifty billion euros savings for us and 50 billion of additional investment by you — that would be a good balance," Macron told the Frankfurter Allgemeine Zeitung on Monday.

"It's in our collective interest that Germany invests." German growth engine stalls

Recent data has suggested that the German economy – traditionally Europe's growth engine – is stalling, threatening to pull the eurozone back into recession and put the brakes on the global recovery.

And France, grappling with sky-high unemployment and a ballooning budget deficit, has been spearheading a campaign for Germany to soften its stance on fiscal austerity and loosen its purse strings to provide much-needed stimulus.

But Berlin remains adamant that the only way out of crisis is for eurozone countries to get their finances in order by sticking to agreed rules on the size of their deficits.

Asked by the mass-circulation daily Bild whether Europe should abandon the path of austerity, Economy Minister Gabriel said: "No.

"But the money we spend on Europe can be put to better use – for investment in research and development, in a fast Internet and in saving energy," he conceded.

Berlin is concerned about the lack of progress in Paris in getting its finances in order and in reforming its economy, but has refrained from making any public comment in recent weeks on the French budget so as not to antagonise its key ally and trading partner.

On Sunday, Macron said he was "absolutely sure" that Brussels would not veto the French budget, which is expected to post a 4.3-percent deficit in 2015 – overshooting the 3.0-percent ceiling set by the EU.

The deficit – the shortfall between revenue and spending – is not expected to drop to that level until 2017.  A 'deal'?

The EU's executive branch has around two weeks to decide whether countries' budget submissions breach the rules.

The Commission has new powers to enforce the deficit limit, and could for the first time send the budget back to Paris for changes.

The outcome will be closely watched, notably by small eurozone countries which have had to make huge and difficult reforms to put their finances in line with EU rules.

The Germans, "assured by the work we're doing could invest for themselves" and that would benefit Europe as a whole.

But Finance Minister Sapin sought to water down the idea of a pact on Monday, which he said was too simplistic.

"It's not a 'we'll give you this if you give us that' sort of deal," he insisted.

It will be Macron's second trip to Germany in a month following a visit at the end of September with Prime Minister Manuel Valls.

Both capitals have tasked economists with drawing up a catalogue of measures which could revive growth and the measures will be aimed at both Germany and France.