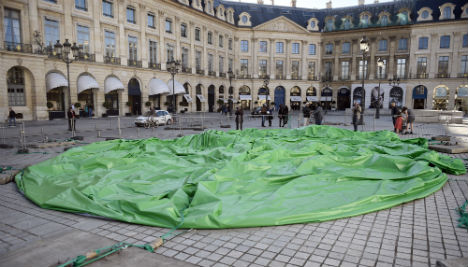 The controversial, inflatable sculpture "Tree" by US artist Paul McCarthy sits deflated on the Vendome square in the center of Paris on October 18, 2014. AFP Photo/Martin Bureau

American artist Paul McCarthy, 69, was slapped three times in the face by an outraged passer as "The Tree" was put up on the city's ritzy Place Vendome on Thursday next to a column topped by a statue of Napoleon.

And on Saturday vandals cut a support cable to leave the 24-metre high work — which provoked a storm of mirth on social media for its resemblance to a "butt plug" — slumped on the pavement.

The FIAC contemporary art fair, which organised for the sculpture to be put up close to the Ritz Hotel, said in a statement that "the artist was worried about potential trouble if the work was put back up".

McCarthy himself said: "Instead of a profound reflection about objects as a mode of expression with multiple meanings, we have witnessed violent reactions."

The artist is known for his controversial and ambiguous works, but even he was surprised at the reception he got in Paris, better known for its relaxed attitude toward sexual matters.

"Individuals waited until the security guard's attention was elsewhere and cut the cable that kept the sculpture in place," a police source told AFP on condition of anonymity.

"The work slumped down," the source said, adding that police were investigating the incident.

A FIAC official said the offenders also unplugged the pump that kept the structure erect.