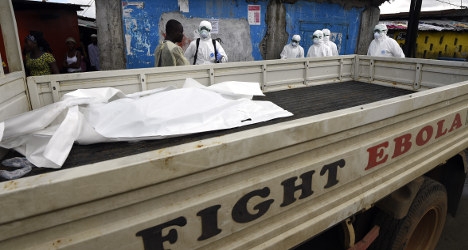 Scientists said in early October that there is a 75 percent chance of Ebola reaching France. Photo: Pascal Guyot/AFP

The daily Air France Paris-Conakry flight "carries a serious risk of spreading the epidemic, particularly in our country," read a statement from the two unions of flight crew and commercial staff.

They called for a closure of the route until the epidemic is under control.

They also slammed what they called totally inappropriate protection from Air France — which provided them with "a simple pair of gloves" — and called for more suitable measures, in a letter to Transport Minister Alain Vidalies.

The unions underlined that other airlines, such as British Airways and Emirates, had suspended flights to Conakry.

France will on Saturday start carrying out health checks on travellers arriving from Guinea, one of the worst-hit nations alongside Liberia and Sierra Leone.

The UN health agency WHO said Friday that 4,555 people had died from Ebola out of a total of 9,216 cases registered in seven countries, as of October 14.